In a world full of social unrest, Anonymonkey is here to bring some semblance of reckoning to the chaos. Made up of Chad “Chadzilla” Johnson (lead vocals, bass, trombone), Ryan “Feegs” Fiegl (guitar) and Sean “Barf” Bartholomew (drums, vocals), this Denver-based band makes music to serve one purpose: create change.

Their debut album Human Suit “aims to invigorate listeners with upbeat tempos, memorable lyrics and catchy melodies while also addressing issues of social injustice, division and the unique human experience.” Drawing inspiration from the seminal rock figures that came before them, the trio still finds a way to be inventive in their musical stylings while creating captivating performances. Steadfast in their mission to redefine social norms, Anonymonkey boldly stands apart as a visceral response to societal transgressions.

Though collaborations between Chadzilla, Feegs, and Barf began long before 2021, the formation of the trio known as Anonymonkey was solidified during the dark and uncertain times of Covid when many musicians and artists were grasping for any semblance of creative outlet and expression.

Their songs are a reflection of the world and often lyrically shine a light on injustice, inequity, and violence. They aim to serve as a unifying force in the community, bringing light to the often dark, divisive nature of our current world. They have each made a career in the Denver music scene for years playing across many genres and in just about every amphitheater, club, and dive bar Denver is known for.

Chadzilla has been a known personality in Denver’s music circles for decades—not only as a multi-instrumentalist, but also as a teacher, producer/engineer/studio owner, and mentor to aspiring and budding artists. Barf, a former student of Chadzilla’s, has carved out a home for himself holding the throne for many acts in Denver’s spirited metal scene. Feegs has made a name for himself in the diverse Denver music community as an educator as well as a player and self-proclaimed abuser of guitars.

Together, they’re making music that rises to the moment, blending the playful with the provocative and writing high-energy songs that are sure to get you thinking, moving, and feeling good. 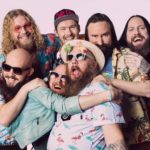