If you feel like you’ve been carrying around a lot of ‘deadweight,’ well, it’s time for you to learn how to lessen that burden. Brush off that dirt, ease those tense shoulders, and take into consideration the point Above All is trying to make with their brand new single “Deadweight.” The release of the track comes with an equally punishing lyric video, with both moving at breakneck speed and intensity.

This is exactly the way to make a re-entrance, after a 25+-year break in between records for Above All. The band has returned, revitalized, rejuvenated, and ready to take no prisoners with their brand new three-song EP Disarm The Gods. This is a bona fide statement, to say the least, that the metallic hardcore group is back and ready to make up for lost time.

“The video reflects the lyrics’ theme of how your own fears and beliefs can drag you down and create your own deadweight. The fast moving images are there to represent the individual fears that hold us down, and the use of black and white imagery symbolizes how darkness can be outshone by light. Ultimately it’s asking the question, do we, or do others create our own deadweight?”

If you were a fan of metal or hardcore in the mid-1990s, then it’s quite likely that you’re very familiar with Above All. The Essex-based band formed in 1993, and went on to some impressive, albeit brief success, which included their debut album Domain being released via Roadrunner Records in 1996, and shows and tours with Life of Agony, Madball, Earth Crisis, Korn, and Fear Factory. By 1997, the band members had decided to part ways, but fast forward to the pandemic lockdown of 2000 and the fire began to burn again and a reformation was in order.

Disarm The Gods features some of Above All’s heaviest recordings to date. After being away for such a long time, the band wanted to make their presence felt, with songs that would reassure old school fans that they have not changed, even with such a long layoff. Produced by Charlie Wilson at Monolith Studios, the EP effectively illustrates that there are few better at blending intense hardcore and heavy metal than the fellows in Above All. Welcome back, guys. 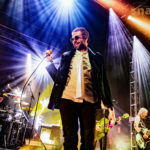 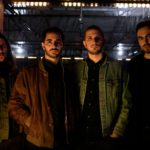