It’s always a party when it comes to our friends in TrollfesT. Shameless in their approach, with a whole lot of cheekiness to boot, the band emerged with their brand new album Flamingo Overload, on Friday, May 27th, through Napalm Records.

Remarkably, this is now the group’s ninth full-length studio record, and it features all of their catchy, groovy, lighthearted appeal, like on their new single “Piña Colada.” TrollfesT, and the new album, are everything you could ever want from the band; they’re loud, groovy, intense, and extremely danceable. They check all the required heavy metal boxes, but there’s so much more to celebrate here, with their original brand of humour, and their party-like approach to what they do.

With song titles on the new record like the aforementioned “Piña Colada,” “All Drinks on Me,” and “The Way You Earn Your Drinks,” there was just no possible way we could pass up a talk with the guys about one of life’s great gifts, alcohol! We recently spoke with guitarist John Espen Sagstad, aka Mr. Seidel, for a new 190 Proof interview about hangovers, drinking games, drunken stories, and virtually anything else you can think of.

Mr. Seidel: “My worst hangover was after a festival we played with TrollfesT somewhere in Europe… We partied like there was no tomorrow after the show and I knew we had a super early flight. But you know how it is, when you are drunk you believe you are invincible and will not be hungover the next day. Well, the hangover kicked in big time the next morning. And I was so ‘sick’ at the airport waiting for our flight. I almost passed out in the queue waiting to board, and when we finally got on the plane we got told that we had to wait two hours before we could fly. So I was stuck in this small airplane seat, no fresh air, etc… trying to survive.”

“Of course the TrollfesT edition of the drinking game, ‘The Drinking Game from Hell.’ A buddy of ours made the most intense drinking game ever and we decided to make a TrollfesT edition of it. No one manages to play through the game without ending up beyond shitfaced, and you have so much fun playing it. The game sold out in no time, so sadly it is not available anymore… But for those who have played it, they know of what I am talking about.”

“Mostly everything we do in TrollfesT involves some alcohol. No matter if it comes to writing, recording or playing a cold beer is always close by. Keeps the creative energy and joy flowing like a warm knife in butter.”

“The preferred drink on our rider is gin. We drink enormous amounts of gin during a tour. Gin & Tonic is for us the drink we never get tired of. No matter how you feel, a Gin & Tonic is always refreshing and gets you right back on your ‘A’ game!”

“Our best, funniest and worst drunk band story is when we did a ‘business’ festival arranged by the promoter of one of the biggest festivals in Europe. We hoped that playing at this ‘business’ festival, it would grant us a spot on the aforementioned festival. We arrived at the venue early and were ready to give it our best! But usually, the problem with TrollfesT, when we arrive early, is that we tend to drink way too much while waiting for our time to hit the stage, and this day was no exception. By the time we hit the stage, some of us were already hammered. Needless to say, we delivered a very chaotic set, but the worst was yet to come.

“When we were done playing, the partying continued backstage and while the headliner played on stage, some of us had already forgotten our own concert from earlier and started to ‘get ready’ for our own show. And by ‘get ready’ I mean stuff like, go back up on stage to try and hang up our own backdrop (while the headliner was playing), etc. Security was also called to our backstage several times due to very high levels of alcohol and not being able to walk from A to B without tearing down the whole room. We thought we had blown every possibility for TrollfesT to ever play at this promoter’s festival ever again, but nooooopes! Later that year we received the offer to play our dream festival… so, mission accomplished!”

“Would probably be what I just mentioned, when we tried to hang up our own backdrop while the headliner of the festival was playing.”

Do you like your beer with a lot of foam or are you more of a trim-the-foam kinda guy?

“I like my beer the way it’s given to me, foam or no foam doesn’t really matter to me as long as the beer is tasty!”

“If a bandmate insults Metallica, just a sip is enough for me to start a fight. But in general, it all depends on my mood. So let’s say after my eighth beer I’m ready to pick a fight with a band member… but of course, only playful fighting…”

“A shot of Fireball Cinnamon Whiskey or maybe a ‘Bitter Sweet’ would be fitting in this scenario. Both suitable while watching the world burn and come to an end.”

“I would say the drink ‘Commonwealth.’ This is one of the most ingredient-heavy drinks out there. And as my life so far, with everything I have experienced, this would be very fitting. And it’s pink…” 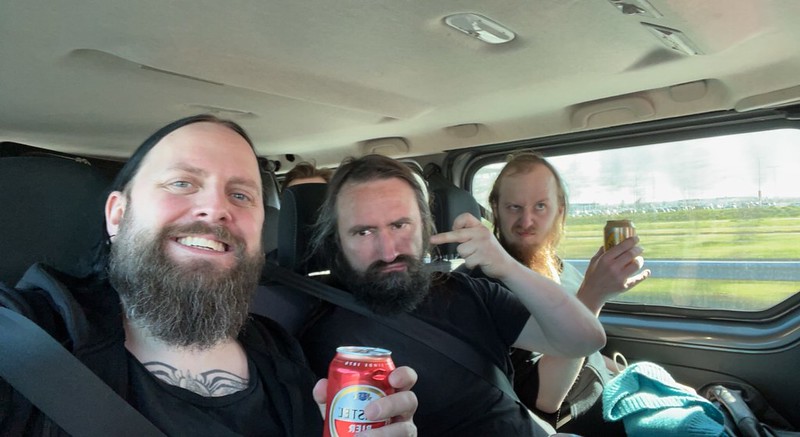 “My drink of choice when starting out was probably moonshine mixed with soda to kill the flavour of alcohol. These days I tend to lean towards beer as my favourite substance. And to be more specific, sour beers. But I would never say no to an Aperol Spritz or Gin & Tonic.”

“Best drink to travel with is probably Gin & Tonic. You get a buzz pretty fast and don’t have to run to the toilet all the time like you have to when drinking big amounts of beer.”

“Anything containing alcohol… but the fastest way is whiskey or any other pure beverage.”

“Buy me a Gin & Tonic. Ninety-nine percent of the time it’s a winner, impossible to fuck this one up.”

Do you remember your first drunken experience, what happened?

“Yes, I do… I drank a six-pack of Corona mixed with lemon juice to mask the taste of beer and I ended up drinking dishwasher soap and eating cat food. The first feeling of alcohol made us all ‘crazy.’”

What do you think about kids soaking tampons in alcohol and then inserting them up their asses to get drunk?

“If they prefer this way of enjoying their alcohol, sure, go ahead. Me, on the other hand, I’m old school and prefer my alcohol the oral way!”

What’s the one thing you’ve done while drunk that would disappoint your mother?

“The better question would be, what’s the one thing I have done while drunk that has NOT disappointed my mother.”

“I once woke up in the middle of a dewy meadow. The sun was lurking over the horizon and I had absolutely no idea of where I was and how I ended up at this place… I felt I was in a dream, but the hammering headache made it obvious I was not. All I could do was to just start walking in a direction and hope I would see signs of civilization sooner or later…”

What’s the worst thing someone has done to you when you’ve been drunk?

“Tell me I can’t enter the bar because I am too drunk. That always hurts…”

“I would say Aperol Spritz. Every time I order one someone needs to comment on it in a silly way. Yes, I acknowledge it’s not the first drink you would expect a person like me to drink, but damn it’s refreshing and goooooood!” 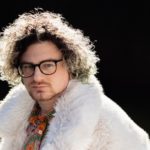 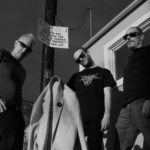