“I like to create some sort of metaphorical dreamland,” said Sandman Sleeps’ vocalist/guitarist Cristina Peck. “To leave something to your imagination.”

Inspired by The Pixies, Kate Bush, Talking Heads, and Tori Amos, their debut album, Crisis Actor, out now through Umbrella Bird, has been described as a “best-of” culled from a decade of songcraft. From personal experiences and emotions, this wonderful recording is a piece of work that offers the listener something new on every spin.

V13 recently asked the band to talk us through the tracks on this record and, unsurprisingly, the answers were as in-depth and emotional as Sandman Sleeps work itself.

“What excited me the most when writing ‘Soaked,’ why it even became a song at all, was the way the piano sounded in a particular space. The reverb was amazing – single notes carried a weight and depth to them. It was easy to evoke a mood without doing much. I got stuck in an ominous feel playing two notes in a lower octave. ‘Soaked’ didn’t turn into an actual song until jamming on it with Tina & the Goose (a trio I played in Rome, GA with Manning Burns and Jeremy Ollis) where the piano melody was translated to guitar.

“Then in 2020, playing the song with Sandman Sleeps, the song became more solidified and a driving force. Being the opener of our album, I feel it does a decent job of setting the stage for what to expect next – as if to let you know what train you just boarded. There are many times I feel like playing these songs feels like playing one of those video games where once you start you have to chug as fast as you can because if you stop you’ll get eaten by the left side of the screen.”

“‘Feet’ spawned from feelings of dissociation and a recurring image of seeing myself standing at the edge of a cliff looking down at a world full of busy people living their lives with purpose and direction. I felt so far away from everything back then, living in Brooklyn, NY at the time, and I didn’t know what decisions to make or how to even jump in. It was supposed to be a comforting song to myself – to remind me that even in times of experiencing emptiness – that this feeling is living too and an experience all on its own. “Feet” was actually the first song we played together in Sandman Sleeps. Alex’s bass is my favourite part of the song which moved it from a very personal space to something more expressive and energetic.”

“‘Opaque’ was written on my acoustic guitar and an Omnichord after a breakup with my partner in 2019. It was about being so heartsick you felt physically ill all the time. Playing this song with Sandman Sleeps was very special. The band brought a liveliness to the song, definitely ramping up the dynamics and making the climactic moments that much more intense. Everyone wrote such perfect parts, too; Zack came up with this droning guitar riff which later soars away into a hopeful dreamland at the end, Alex digs in with a heavy weighted bass, and Karsten (responsible for turning the song into a ballad) throws in this weird tom hit in the verses which feels like a heart palpitation – it was perfect.”

“‘Fellini’ (Fettuccini as we call it at practice) began in 2009 when Alex and I first began Sandman Sleeps, with her then-partner and our good friend, Gavin McAlexander on drums. This song was derived from Alex’s bass line she wrote. Most of it she had laid out already, and I just came in playing single notes on the guitar, and the vocal melody organically flowed from there while jamming. Lyrically, the song is inspired by the shame one may feel as a result of behaving recklessly at a party and deeply regretting it later on. Aka, making a legit ass of yourself publicly.”

“This is probably the heaviest and most personal song on the album. It is also about three different subjects (which I won’t touch on). At practice we call this song ‘People’s Court’ (because it sounds like the intro to the show, so the guys say) so appropriately, Karsten usually starts the song off with a double (gavel) click. The guitar communication in this song is really exciting to me as well as how the bass and kick meet up and skip around each other. It’s an interesting interaction.

“Space (musically) is also a theme in the song. There was a focus on what should be played, where specifically, and when it would be striking to have silence. We have a part of the song as well which we call the ‘crab walk’ where Zack and I angle around like dancing crabs while playing our guitar riffs. I can say as a band we intuitively insert humour when we can. High energy and humour combined with heavy subject matter has always interested me.”

“This song was my mission for so many years. I think there are about three different recorded versions of this song, none of which have been officially released. It began with a jam that Manning (collaborator in Tina & the Goose) and I recorded back in 2012 where he was on a Magic Genie organ and I was singing through a distorted Turner mic with a tremolo effect. He started playing this catchy single note intro and later wrote the main bass hook while I wrote the lyrics and melody.

“Years later introducing the song to Sandman Sleeps, we all took it a bit further and wrote a second half to the song which was catapulted by Alex’s bass line. It began feeling like more of a narrative that pulled loose ends of the song together, finally reaching a sense of completion. Then our friend, Greg (secret fifth member of Sandman) put this gorgeous synth on the song which captured that celestial feel I had always imagined. Although this song has taken many forms it was always about the same subject – a subconsciously manipulative black hole devouring a spiral galaxy. You can do as you’d like with that.”

“This song, written in 2020, was essentially an experiment with lyrics. I was researching Dadaist poetry and began writing down words on signs I’d see around and putting them together. I knew the song was about urgency and a need to escape so I wanted the lyrics to form in a way to convey that but at the same time I didn’t want them to be descriptive of any particular event. Even though the lyrics developed somewhat randomly it was surprising how I’d relate to them emotionally afterwards versus writing them from a more intimate spot to begin with. As a band, this song makes all of us sweat when playing it and if one of us gets off time it is the worst thing in the world, but you can dance to it when it’s done right.”

“This song, written in June 2020 on my acoustic, transformed so beautifully with the band. Karsten essentially reconstructed the rhythm of this song. We all followed suit and fell in love with it. Alex chooses notes carefully which hit with an impact and Zack’s dreamy guitar coincides with the theme of time travel and a dream-like realm that we had aimed for. Greg is also on this one with synth and textures. Lyrically, I was inspired by the movie “Portrait of Jennie” for its concept of love and time travel, but more truthfully the film worked more so as a strainer for words to form through – the song, at the end of the day, is more personal.”

“This is probably the most formulaic song on the album as well as probably the oddball on there but it is one of my favourites nonetheless. It began on an acoustic guitar and, with the band, it adapted more of a punky feel which I love. The song ventured into different territory stylistically a bit for us and it was fun to see how we’d make it our own.”

“‘Rare Cloud’ is another old song that underwent different surgeries. I was trying to reach for chords that I typically didn’t use together in an attempt to break my usual routine of writing and a routine malaise. Alex heard a live recording of the song we had played in Tina & the Goose and loved it so we brought the song back and introduced it to Sandman Sleeps. The way Alex played bass to the song made me fall in love with it again and then the band just pushed it even further where it needed to be. It’s anything but a bore for us to play which is all I can hope for with any of the songs as well as how they are received.” 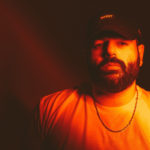