For Phourist & the Photons, their music is a bit like a winding road; it takes you places you weren’t expecting, but it still gets you to where you want to go. You’ll find that’s the case on their latest album, My Many Mortal Forms, which you can hear right now for the first time, ahead of its official release on April 22nd.

The band has become known for their divergent, atypical song structures, which often include winding musical parts and unconventional arrangements grounded with catchy pop-rock hooks. Featuring ten new tracks, My Many Mortal Forms includes memorable, affective melodies and driving rhythms, with a slight dash of psychedelia. The writing process for the album was a lesson in exploration, with the finished product not necessarily sounding like what was initially intended.

Explaining the songwriting process and what his intentions were, guitarist Andrew Critchelow says:

“From the beginning, I envisioned this album as a ‘headphones’ record. I wanted to help create a batch of songs that flow cohesively and emphasize sonic texture, an album that takes you on some sort of nocturnal journey. I’m proud to say we’ve pulled that off with My Many Mortal Forms.

“The process was meticulous at times, with several discussions over track listing, arrangement and mixing. But, as COVID made so many traditional hallmarks of being a band unrealistic over the past two years, the process of perfecting this project was a much-needed constant in our lives. When it comes to my own contributions to these songs, it’s certainly the record I’m most proud of so far. Of course, when you have such brilliant songwriting from Nick and the best rhythm section this side of the Mississippi in Scott and Jailynn, inspiration was never in short supply.”

“To me, this is a good night-driving album. It creates a migratory mood and maintains it throughout the course of its 45-minute run-time, with plenty of surprises along the way. The process of creating My Many Mortal Forms was pure discovery. I did not expect any of it to sound the way it did, we just kept chiseling away at the piece until it felt right. I’m proud of everybody that worked on it, and I’d like to think the music will speak for itself.”

Explaining how the album is different from the band’s previous output, drummer Scott Boice tells us:

“The hooks have gotten catchier, the playing has gotten elevated, and over all we’re just very happy with it. Our last three albums were all recorded live, but this time around we recorded the parts separately starting with the drums. This gave us the time and ability to make everything sound exactly how we pictured it. This album leans into Nick’s pop sensibilities as well as Andrew’s taste for fuzzed-out guitar tones.”

As the newest member of the band, bassist Jailynn Noel had no problem fitting in, as she explains:

“Many Mortal Forms is my debut album with the Photons, and I knew from the start that I wanted to contribute my best work. The recording session was asynchronous, and because I was one of the last to add my parts in I had plenty of time to internalize what Nick, Scott, and Andrew were doing. The guys laid down a great foundation to build off of, and I was able to record everything in one take. I’m very lucky and honoured to be able to make music with this group.”

Phourist & the Photons have become quite well known in and around their native Louisville, Kentucky. Now they are looking to get out on the road and show the rest of America what they’ve been missing. 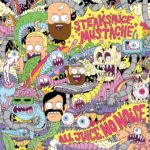