Originally planned for release in March 2021, the album campaign needed to be paused when guitarist Dave suffered a severe, almost life-ending stroke at the beginning of 2021 after contracting COVID. Thankfully, he is on the long road to recovery, and with his blessing, the band is now finally able to release their new album.

To find out more about the name change, how life changed for Dave and the band following his stroke, and what the future holds in store for the Welsh group, V13 recently spoke to bassist Stuart Sinclair.

“I hadn’t worked like this before but it was really cathartic and I’d happily work that way again.”

Stuart Sinclair: “Ahh, you know, same as everyone in these bizarre times, coping, getting by, working the day job as much as possible.”

First of all, let’s talk about the trimmed-down band name. What was the thought process behind the change?

“We used to get asked about the name a lot to the point where people were focusing on the name rather than the music, and I even know of people that were put off by the name and wouldn’t even bother giving us a try so…”

The first part of that journey is The Harvest, an album Jessica has described as “a raw, real-time experience of processing difficulties in both personal and general life.” What does the album mean to you?

“Yeah to me it’s the same feelings, it’s the piece of creative output that comes from the processing of what was happening in our lives and in the world at the time. I hadn’t worked like that much before but it was really cathartic and I’d happily work that way again, not being over-prepared going into the studio, we didn’t want it to be over-calculated and come out boring and stale.”

In terms of personal difficulties, nothing could have prepared you for the tragedy that struck Dave. What is the most important thing you’ve taken away from that period?

“Just to embrace every moment and opportunity because you really don’t know when or if you’ll have time in future, putting that into practice while suffering with other issues and mental health is difficult. It’s definitely a catch 22, you don’t want to waste time but things while work out or process in your head in the time it takes, I don’t like forcing anything because it will feel fake, it can be frustrating, it feels like you’re not doing anything but you are, you’re just surviving.”

It’s obviously been a life-changing event for Dave. Will these experiences inspire new material?

“Yeah, most probably, but I’m still in a place where I’ve been avoiding having to think about it at the moment. I’ve been here before in a similar situation in an old band I was in, and it did inspire material back then.”

Going back to The Harvest, the sound has been described as refined and honed down. Was that in line with the new name or is it something you planned to do?

“Yes, it was planned to a point. Dave always wanted to do a more soundtrack vibe synth album ‘but with riffs’ he would always add, and this is that album. I personally think it’s refined in the way that there are more of the elements on the record that made us different from the other bands in our scene. We’ve distilled what makes us different I suppose is what I’m saying and gone further into it.”

Does 2022 feel like a new chapter for the band and what is your vision for the future of the band?

“It’s really early days for that. We just what Dave to keep on progressing for now and we’ll see.”

The album was written and conceived to be listened to in sequence. What was the reason behind writing the album that way?

“All albums are written that way, right? Or is that me being super naive? Every band I’ve been in, records I’ve been a part of, including MWWB, we’ve always discussed and worked out what order the songs should be in, whether it’s because it tells a story or to have a good flow sonically to it. It’s the way it’s done in my opinion, it’s not a collection of singles. So yeah it was written to be listened to in sequence because The Harvest is like a movie soundtrack, but the movie doesn’t exist so it does have its own narrative.”

Do you think there is a particular mood or setting with which it is best to experience the album?

“I’m a night person, so I think everything is better in the wee hours. But this alien invasion can happen anytime, man.”

When someone listens to the album as an entire piece of work, what do you hope they get out of that?

“Just that they can connect or feel something I guess, and then they themselves feel like they can express something, everyone’s so black-pilled these days that it can be frustrating when people don’t react or say something out of fear of being ridiculed. I personally do this for myself, so I try not to think or dwell too much on if people like it. If they do, awesome, if they hate it, at least they know.”

As a sequential work, how will that work as part of a live show? Is it something you plan to play out in its entirety?

“Honestly, something that hasn’t been thought about yet, like I said before we all just got our thoughts on Dave’s progress and recovery. But I’ve played albums start to finish in other projects and bands I’ve done and it is a cool thing to do so who knows.”

On that note, just to finish off, what are your plans for touring in 2022?

“We just don’t know at this stage; again, Dave’s recovery is our main focus as well as just getting the record out after sitting on it for so long.” 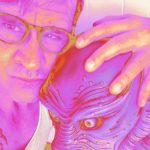