Kenosha, Wisconsin’s death metal mainstays Jungle Rot will release their latest studio recording, A Call to Arms, on May 13th via Unique Leader Records. Today, the band has unveiled the single and accompanying music video, “A Call to Arms.” The album was co-produced by Chris Djuricic and the band and mixed/mastered by Dan Swanö.

A Call to Arms Track Listing: 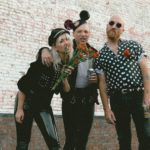