How do you completely reinvent yourself as a musician? You throw caution to the wind, plus whatever you thought you knew about recording. That’s kind of what happened with Forever Era and the recording of their self-titled debut album, due out May 13th, via the Chicago label File 13.

The band is composed of some seasoned pros who really branched out, away from their previous musical endeavours. A trio, the group is comprised of Yukio Murata of My Way My Love, Adam Reach of The Poison Arrows and Pink Avalanche, and Justin Sinkovich, also of The Poison Arrows, as well as the bands Acquaintances, Atombombpocketknife, and Thumbnail. Pretty active crew, eh?

“Subject Fell” is the first single to be released from the upcoming record, a beautifully dissonant and discordant display of live drums and samples. Commenting on the song, how it was recorded, and its inspirations, Sinkovich tells us:

“The process for live drums on the album was to start with a drum machine programmed by Adam or I. Then Adam would go in and record two takes on the drums. I would place one single microphone in front of the kit and then use both drum takes in stereo on the right and left side, usually taking out the drum machine completely which leaves a unique live double drum pattern. I layered keyboards on top of that, then sent it to Yukio and he added the cool vocal samples.

“I decided to add vocals late in the game, and used ‘Subject Fell’ from a list of song titles I had in my notes. The title came from the police/emergency scanner out in the woods where I was living most of the time while making the album. The scanner was constantly calling an ambulance because the ‘Subject Fell.’ There is a lot of snow, ice, and hills out there with a ski resort and a lot of bars downtown, so that’s probably the reason for all of the calls, but I wrote a little abstract fiction about why these folks were falling all of the time.”

When The Poison Arrows decided to postpone the recording of their new record, Sinkovich relocated to a small house in the woods, a few hours outside of Chicago, where he would stay for the next year, slowly building up some new songs for a new project. As it gained more momentum, he contacted Murata who began contributing to these new tracks from Tokyo. Reach, meanwhile, had moved from Chicago to Chapel Hill, North Carolina and it was there he worked on all of the drumming sequences.

When the song parts were passed around to each other, the band generally ignored traditional recording practices by sending stereo mixes of tracks that could be easily manipulated. They layered their contributions on top of each other’s parts as another stereo mix, a process that traditional audio engineers would balk at.

All in all, the album came out as intended, a bunch of experimental hard rock songs that strike a balance between cohesion and chaos. 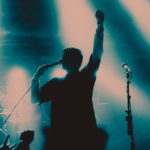 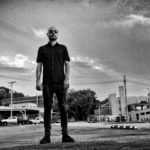