I was understandably concerned when Cancer Bats parted ways with founding guitarist Scott Middleton; his tone has resonated so prominently on all of the Bats’ past six releases. So is it a disservice to him if I say that the material on the new album sounds just as meaty as without him? I’m sure there were numerous discussions about what should happen next for creating material between lead vocalist Liam Cormier (with whom we recently spoke), bassist and guitarist Jaye Schwarzer, and drummer Mike Peters in his absence. One listen to Psychic Jailbreak, and it’s apparent those discussions ended with “let’s just make another ripper album.”

With Schwarzer handling both bass and guitar on Psychic Jailbreak, combined with the band putting their demos for the album together remotely during the pandemic, this record could quickly have headed into the terrain of mediocrity. Alas, “Radiate” starts things off with a clear message: it’s business as usual for Cancer Bats. It’s a sizzling three minutes featuring everything fans love most about the band: blast beats, lighting riffs, and snarling vocals landing the group somewhere between hardcore punk and crossover metal.

The only surprise on Psychic Jailbreak is “Hammering On,” a song that owes a debt of gratitude to the Bat Sabbath experience from a few years back. It’s a sludgy rambler of a track that features Brooklyn Duran dueting with Liam, and it comes off like a doomy blast of devil worship.

One of my favourite tracks is “The Hoof.” It features lyrics like: “My life was saved by a skateboard; Nothing’s ever going to stop me now; These wheels will roll like thunder.” Mike’s drums on the track are utterly relentless; it’s practically screaming to be played at full volume in a club packed full of thrashing kids all slam dancing to its alluring greatness.

Psychic Jailbreak sounds as pummeling and dangerous as any previous Cancer Bats album. The band didn’t need a reason to prove themselves, but if that was a factor in creating the new album, it’s a win-win. 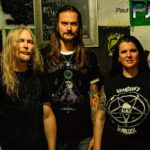 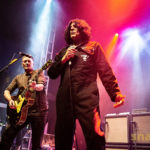