Post-rockers Oh Hiroshima are getting ready to raise the bar with the release of their new record Myriad. Due to be released this Friday, via Napalm Records, the band’s fourth album is the most musically advanced collection they will have yet to release. As a result of the pandemic-related lockdowns, the group was afforded additional time to finetune the sound and production of the album, coming through with a very worthwhile follow-up to 2019’s acclaimed Oscillation.

Myriad is a mixed bag of emotions, with more melancholy moments, and ones of clarity, precision, and power. The incorporation of trumpets, cellos, and trombones throughout has added a whole new musical dimension to the group, which is now actually a duo since last year when bassist Simon Forsberg decided to move on. Despite the loss of Forsberg, it afforded remaining members Jakob Hemström and Oskar Nilsson to broaden their sound and branch out.

With Myriad now arriving in our playlists this week, Hemström has joined us today for a session of Stereo Six, in which he describes to us six albums that were integral for him in the writing and recording of this impressive new record.

“I listened to a lot of shoegaze while writing for Myriad and this is of course the most classic shoegaze album of them all. Listening to My Bloody Valentine during the writing process made me want to have a more distorted sound and pushed me to use classic chords in ways that I usually don’t when writing for Oh Hiroshima.”

“This is an important record for me, and for the sound of Oh Hiroshima from the start of the band up until today. It was the record that got me into certain types of heavier music, and eventually led me to embrace the post-rock genre. Such a great mix of both of those worlds. I listened a lot to this record while learning to play guitar, so certain techniques and ways of playing on this record still informs my own guitar playing to a large extent.”

“One of my favourite bands of all time. I’m constantly returning to their records, so I’m sure they somehow influence everything I do musically. I love the minimalism, and of course the heart-aching beauty of the vocal harmonies, but also how heavy they can get when not even using a full drum set. I listed this album because it was their latest release when we were writing for Myriad, but basically everything they do creeps into my creative mind.”

“David Eugene Edwards’ music have always had a big influence on me since the first time I listened to Mosaic, and especially after seeing him perform live during that era of his career. This is immensely powerful music. It’s primitive in a way that makes it reach into the deepest depths of your very being.”

“The latest GIAA album is my favourite from their whole discography. It’s fast-paced and quite short, but there so much happening in there. They keep it interesting while sticking to drums, bass, and two guitars for a large portion of the album. I really like that, and I love the sounds of the guitars on this one. It definitely inspired me to write more intense and direct songs when working on Myriad.”

“Johnny Marr’s guitar playing is the best. So original, such a great sound and so many cleaver ways of approaching songs with the guitar. His way of playing these angular chords note-by-note on the E-B-G strings has always inspired me. On top of this we got Morrissey’s tender but powerful voice floating over the music in a way that’s purely addictive. When working on some of the vocal parts for Myriad, there where certainly times when I felt myself being drawn to his distinctive way of singing.” 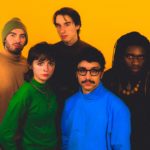 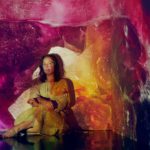 UnCovered: Sarah Hiltz Ventures Behind the Artwork of Her Record ‘Calm Fury’