Indie-folk trio Racyne Parker & the Low Coals are a force in the making. Consisting of Racyne Parker (lead vocals, rhythm guitar), Jordan Renn (bass, rhythm guitar) and Nick Wood (drums), the Colorado-based band started working on their debut EP Feel It Now two summers ago. With its March 31 release, fans can expect to hear everything from lively verses and adrenaline-heavy riffs to a live-band sound. Because of the timing of the group’s collaboration, the EP is inherently tied to the state of the world in 2020, when uncertainty became the norm. Not only that, but the uncertainty of being young artists in the industry, trying to make it work.

In this way, Racyne Parker & the Low Coals attempt to bring light to those dark times with their hybrid sound and intentional lyrics. In the title track, the band showcases their knack for rock ’n’ roll, giving the feel of high highs and low lows as the character at hand grapples with hedonism at its most self-destructive. “Feel It Now” touches on “themes of keeping depression and anxiety at bay and finding moments of clarity in the midst of spinning out – all of this, framed in the context of a night out,” the band explains.

Despite the heavy subject matter, there is an air of badassery to the production style, as if to mirror the pull of over-indulgence. Wood reckons it’s the perfect song to listen when “doing something extreme,” adding, “or you might just turn this one up loud and yell along in your car on your way to work.”

The other two tracks on the EP, “Just A House,” a poignant reflection of the world around us, and “Call Me Killer,” a sassy, edgy, live-show staple, work in symbiosis to create a distinctive feel for the debut record. On “Just A House,” Renn’s brainchild, he points out how “timely” the track is. Explaining that “the seemingly chronic struggle of our generation and the circumstances we find ourselves in have just reiterated that in many ways the ‘American Dream’ is kinda dead.”

Even so, the track is hopeful. “We’re here and we’re okay, as long as we stick together and lean into our people,” Renn says. On the EP as a whole, Parker shares how proud she is of Feel It Now and looks to the future with excitement for further musical explorations. “The fellas and I agree, we’re better together than we are on our own, so this collaboration is one that I can’t wait to share with the people who have been supporting us since day one and the people who we can’t wait to meet for the first time!”

With modern folk, country, and indie influences, singer-songwriter Racyne Parker joined forces with a local Southern Oregon band, Lucid Blue, in the spring of 2019 for a year of full-band shows. With a live set that combined Racyne’s country-leaning originals and Lucid Blue’s funk-inspired style, they found a new sound that they were excited to explore. 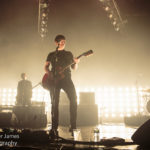