If it’s possible to sound both retro and futuristic, this duo is capable of reaching that height, with this new song a triumph of heavy and distorted guitars, eerie ambience, and transcendent musical experimentation. For just two members, each song on The Hum of The Machine packs a heavy bunch, with 1970s and 1980s science fiction providing a significant influence on their songwriting. The follow-up to 2020’s four-song EP A.C.I.D. Compliant, The Hum of The Machine is a musical exploratory album, dynamic and compelling, willing to go places other bands would not.

Explaining the song and its context, Gramma Vedetta tells us:

“‘Transmission’s On’ is a sarcastic interpretation of those random thoughts that pop in your head at night and keep you awake at night. You are not good enough, you ate too many carbs, you lost your job, you have to pay the rent. ‘Everything is wrong, but it seems just right.’

“We’ve written down all those thoughts in verses, and put them on top of a chord progression that could be The Melvins covering Pink Floyd. It is a very dynamic song, with lots of ups and downs, a trippy exploration of the different personalities that our brain can create.

The Hum of The Machine is an ambitious new album for a very ambitious pair of artists. The record is more than just an audio experience, it also has a visual component with the band teaming up with some talented illustrators who helped translate the twosome’s songs into images. The songs themselves were written with great attention given to the production of each track.

While A.C.I.D. Compliant was more of a stoner record, The Hum of The Machine dives much further into the world of progressive rock. There’s an overarching concept that runs through the album’s nine songs that tell a story of a man in pursuit of remaining unique in an environment where you are rewarded as a member of the upper crust of society if you stay compliant. It’s very reflective of the times we live in and a record certainly ideal for those who like to be challenged, not content with being force-fed the status quo. 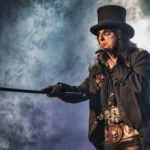