A formidable musical duo, Zach James and Andrew Bailey are causing quite a stir ahead of the release of the new Dead Tooth EP, Pig Pile, via Trash Casual. The two musicians and songwriters have become well known for having one of the most impressive stage shows in New York City, as they reel you into their atmosphere while feeding off each other’s energy and intensity.

When they began to seriously write and record together, the songs and their structure began to take on a darker form, quite a change from the folk-rock that they had toyed with in the earlier phases of their collaboration. Both James and Bailey came into the project well prepared, with James previously known as the Silver Spaceman, a bedroom folk superhero persona that he started in 2015, and Bailey well respected for his time as guitarist for shoegaze group DIIV.

Bailey and James initially got to know each other on smoke breaks while they worked long shifts at a local diner. At first, Bailey was modest about his gig in DIIV to the point where James didn’t find out about it until he saw his friend play a sold-out show at the Music Hall of Williamsburg.

Considering the roots of their relationship, we chose to get to know Bailey and James in a slightly different manner. Rather than talk music, we connected with them for a list of the top six lessons they learned while delivering meals for that famed local diner that helped bring the band together.

1. “Always sing while biking. Biking is so fun and so is singing. Your blood gets pumping and the creative juices start flowing. It’s also good performance training. If you can sing your set during a delivery shift which can sometimes be as much as 30 to 40 miles a day, you’ll be in good shape for the show.”

2. “Dating fellow employees is ok. Depending on their musical taste I’d say delve full in heart first or hold off. In my case, I dated one of the line cooks who introduced me to Karen Dalton and Mississippi Fred McDowell. Though the relationship didn’t work out in the long run it wasn’t all in vain and I still have a cool friend.”

3. “Don’t let fellow employees get you stoned on their cigarette breaks unless you’re well seasoned. Aside from biking while impaired there are many downsides to doing this. I’m a once in a while when I’m alone kind of smoker and one time Andrew got me ripped when he was out from behind the juicer. For me, weed, while stimulating and great for creativity, can get me in a whole lot of trouble when delivering four or five different huge food orders at once inconveniently placed miles apart from one another. I only did this once and would 10/10 not recommend trying it. Bike safe, bike sober, and wear a damn helmet.”

4. “Don’t forget your ABrCs (Always Be reCording). Voice memo app ready. Herman Hesse wrote most of his novels while gardening. For me, creative ideas seem to come while I’m the busiest and least prepared, so I try to always have my voice recording app ready on my phone. You wouldn’t want to walk up on a wild stage three Charizard without your Pokéball. The same principles apply to your delivery route. Just please be safe like I said.”

5. “I really learned how to channel my anger. Nothing inspires your creative process more than nearly dying regularly. It really curbs your ego and gives things meaning. It’s dangerous as hell out there. People fuck with you in awful ways. Sometimes they’ll intentionally speed up and drive as close as they can just to scare you. I got hit by a drunk guy making an illegal left turn once. I got doored by an Italian man who tried to act like it was my fault. We almost fought in the middle of the street. It seems like nobody ever wants to feel bad for hitting a biker and it seems like they automatically get angry and blame you every single time. This really taught me perseverance and patience and the ability to keep calm.

“One time I gave these guys in a blacked-out Lincoln Navigator the finger for almost hitting me and they pulled up next to me and stared right through me. They both had gold chains and one of them was smoking a cigar with what looked like a gun in his hand and he pulled down his glasses and asked, ‘now was that necessary?’ I kindly replied, ‘no sir it was not’ and they drove away. That’s when I learned to just shut the fuck up sometimes. Know your place and be humble. Don’t flip off strangers. The best thing to do is take that anger that boils up at your job and put it in your art. It can kill you out in the world. I used to go to my practice space after every shift and smash the drums to blow off steam and then I’d write some of my best music ever.”

6. “One of the best things I learned how to do was how to practice when you’re not around an instrument. You can run your whole set in your head and just think about notes you’re going to play even if you’re just out there biking. Our old bassist Jason was incredible at this. He played in so many different projects that he totally mastered the art of instrument-less practice. You can do it anywhere. I got really good at biking with no hands and would air guitar the set the whole shift the day of the gig to make sure I had it down pat.” 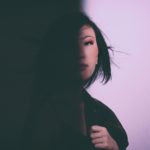 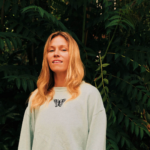