In preparation for the upcoming release of Carpenter Brut’s latest record, I have only one piece of advice: prepare a palm-sized, flat area of flesh to be assaulted, because this album slaps. Hard. Following that initial physical response, it will be that much easier to sit back and revel in the glory that is Leather Terror.

To start with, if you – like me – are a longtime follower of the master of synthwave horror madness, don’t expect any kind of regurgitation or sitting on past laurels: Leather Terror is fresh, new and exciting on multiple levels. Obviously, given the nature of electro and synthwave, new is only valid for a given value of novelty, as all synth music stands on the shoulders of giants from decades long past: and all these are respectfully represented and acknowledged – yet never copied, even in the case of excellent cover versions like his 2020 version of the Flashdance theme song, Michael Sembello’s “Maniac” – throughout Carpenter Brut’s extensive catalogue.

You can’t help but love the social cynicism and the LSD oddness.

But Leather Terror looks forward, rather than behind, in terms of the carpenter Brut mythos; no more indie horror Lovecraftian tales (like 2015’s “Escape From Midwich Valley”) or occult sci-fi soundscaping (such as 2016’s “Turbo Killer,” which ended up becoming the inspiration for the Seth Ickerman feature, “Blood Machines”), but a driven, dance-friendly sonic aesthetic colours the entire proceedings. In fact, Carpenter Brut shifts gears on Leather Terror, dragging us behind his technicolour muscle car through realms of pop electro, industrial and EBM on chains of avant-garde, sleazy synthetics.

And while there is a lot to process along that ride (including multiple guest vocalists, from Ulver’s Kristoffer Rygg on the midway breathing gap, “…Good Night, Goodbye” to Sylvaine’s Kathrine Shepard on the ethereal ballad “Stabat Mater”) it may be best to break it down chronologically… starting with the first single, “Imaginary Fire.” The Dillinger Escape Plan’s Greg Puciato’s vocal performance lends some grit, resulting in a ’90s industrial homage to the likes of Stabbing Westward or Sister Machine Gun, with just enough metal in the works to give the track some real kick. The CGI music video recalls the surreal imagery of Carpenter Brut’s history effectively, while also visually preparing the listener for the next chapter in the legend, setting the whole along dystopian Californian beaches and beginning the preparations for a glam extravaganza.

And that’s where the second single, “The Widowmaker,” kicks off. 2018’s Leather Teeth introduced us to Bret Halford, a mistreated student from Midwich High who, after a disfiguring accident, embraced a new persona, that of ‘Leather Teeth,’ the frontman of glam metal superstars ‘Leather Patrol,’ while also exterminating his jock-crowd tormentors one by one, in the goriest fashion imaginable. On Leather Terror, Bret is living his rockstar life, but also taking the time to finish off his kill list; Alex Westaway of Gunship’s vocals lend the synthpop anthem a decidedly Puscifer-esque tone, making the overall effect just a touch too left-field to really be pop and the Deka Brothers’ direction takes us in a glitter-and-confetti coated direction we could never have anticipated.

The ongoing narrative is what really sets Carpenter Brut apart: not that he is making another concept album trilogy (his three original EP releases spanning the 2012-2015 period I, II and III have since been re-released as a collection titled Trilogy) but that he is so skilled at developing believable atmospheres across all his work – not just catchy melodies or infectious beats. Take, for example, the eponymous album closer, where the haunting organs create a doom-ridden soundscape perfectly matched to Jonka Andersson of Tribulation’s gravelly gothic vocals.

A fitting slasher-ish visual to continue the tale started four years ago.

However, if it is catchy you are after, there is still more than enough to go around, from the bubblegum bounce of “Lipstick Masquerade” (featuring Parisian singer Persha) to the techno body music dual assault of “Day Stalker” and “Night Prowler” (insert Front 242 nostalgic reminiscence here), or the shimmery, soaring anthem of “Paradis Gloria,” or even the blasting metal-infused drum groove on “Straight Outta Hell.” Leather Terror really is an evolution in Carpenter Brut’s sound, and a seriously exciting leap forward to a more ’90s-centric sonic palette than the ’80s retro style of his previous records – without abandoning any of the B-movie sleaze that makes his music so damn appealing to such a wide, varied audience. Here’s a producer that can equally delight the diverse crowds of Hellfest and Coachella, and that’s no mean feat. Horns up, hands in the air, high fives and breakdancing all in one parent-perturbing package – what an achievement. 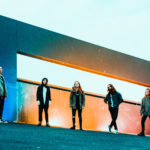 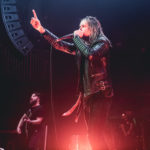