It might be early March here in the UK, but it’s still a bit on the chilly side as the thousands of punk and emo fans stream in from all directions for this hugely anticipated double-headliner consisting of Chicago punk rockers Alkaline Trio and New York emo kings Taking Back Sunday.

With the masses still making their way into the cavernous Victoria Warehouse, it’s up to Californian quartet Destroy Boys to kick things off. Now, usually going on stage early doors means little more than a muted response from the early punters, but that’s not the case for the Californians who certainly have more than a few friends in the crowd. Packing a dirty, grungy, almost L7-esque feel to their songs, the punk/grunge four-piece fling themselves about with the kind of carefree attitude that comes with being the opening act and, after thirty minutes, have this Manchester crowd adequately warmed up for the main event.

If Destroy Boys were the warm-up, then co-headliners Taking Back Sunday lit the fuse on this party with a blistering, career-spanning set. Kicking off their thirteen-song set with “What’s It Feel Like To Be A Ghost,” the next hour or so is a fun-packed, high-energy trip through some of the finest moments of the New York band’s much-loved back catalogue.

Of course, the star of the show is Taking Back Sunday frontman Adam Lazzara, who struts about the stage like he was born to be a rock superstar. From his banter with the crowd to his soaring vocals, keeping up with the man is a task in its own right. Hugely entertaining between songs as he addresses the adoring masses, his powerful, stunning voice is absolutely flawless throughout although the Manchester crowd do their best to drown him out singing back every word.

Cruising down the home run with the brilliant “Cute Without the ‘E’ (Cut From The Team)” before wrapping things up with emo anthem “MakeDamnSure,” the New York band were truly special and, even twenty+ years into their career showed that they are still at the top of their game.

Having to follow the kind of performance that Taking Back Sunday put on is a difficult task for any group but Matt Skiba-led punk rockers Alkaline Trio are very much up to the task. This is no big rock show though and, as the three-piece strides out onto a sparse set-up consisting of just two mics and a drum kit in front of their huge backdrop, this is very much going to be about the music. 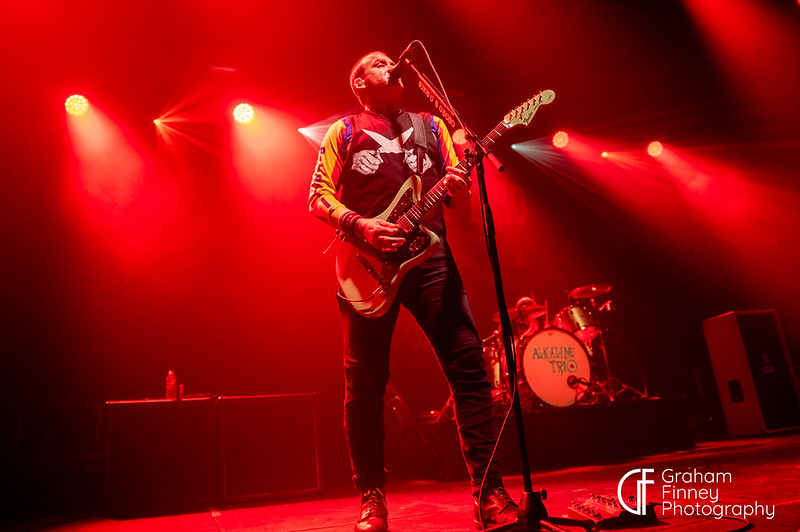 So, what better way could there be to kick off the set than with their classic punk rock anthem “Private Eye.” Front to back this packed-out venue is absolutely bouncing with fans young and old singing their hearts out. As with Taking Back Sunday, Alkaline Trio spent eighteen songs wading through their immense back catalogue. For the thousands of fans snatching up tickets for this tour, the Chicago band’s nine studio albums, kicking off with 1998’s Goddammit, hold a special place in their hearts, so it was nice to see the group dive that far back for hardcore fans.

Elsewhere the likes of “I Wanna Be A Warhol” and “Mercy Me” had a sea of faces beaming as far as you could see across this room while cuts from their hit album 2003’s Good Mourning including “We’ve Had Enough,” “Emma” and main set closer “This Could Be Love,” transported every single person back to their early years of the 2000s. Closing the night with “Time To Waste,” this absolutely glorious night of pop-punk and emo came to a wonderful finale as band and crowd joined together as one to raise the roof one last time. 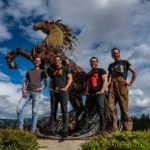 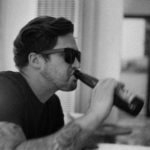