Aside from the two new tracks on Primeval, a collection that saw Welsh metal quintet Venom Prison reworking a pick of their older material, Erebos is the first new material we’ve heard from the band since 2019’s stunning Samsara album. In that time, the group have talked about growing and expanding their death metal onslaught and, from initial singles “Judges of the Underworld,” “Pain Of Oizys” and “Nemesis,” the band have kept to that promise.

Erebos (a primordial deity and the personification of darkness), is a brutal slice of Welsh death metal but, while the likes of the crushing “Judges of the Underworld” do pummel you into a mush, there is so much more depth and variety to the material. The haunting “Pain Of Oizys” is a perfect example of this where we hear vocalist Larissa Stupar revealing the full range of her vocal talents. From the mesmerizing gentler tones to the more familiar-sounding paint-peeling screams, the range on display weaves perfectly around the wonderful mix of teeth-loosening heaviness and rockier, almost proggy sections. If there was any proof needed that the collective minds in Venom Prison were thinking outside the box on Erebos, you need look no further than these five and a half stunning minutes.

On paper tracks like “Golden Apples Of The Hesperides” and “Castigated In Steel And Concrete” sound like slices of primed-to-detonate death metal but they end up being that and so much more. Built on waves of blast-beat peppered rage, swirling around underneath is a dramatic layer of atmospherics and electronics with the final touches coming in the form of some gloriously traditional metal melodies. Speaking to guitarist Ash Gray last year, one of his comments was how producer Scott Atkins had pushed the musicianship to previously unheard levels and as Erebos travels through its expansive musical landscape, it does feel like everything is so much more epic.

It’s not just musically as well where Venom Prison has upped the ante. Delve into Stupar’s lyrics and it becomes apparent that there is also so much more to Erebos on a lyrical level. From tales of oppression on “Judges of the Underworld” to more personally inspired tracks like “Pain Of Oizys,” Stupar matches the mood of her words perfectly with an effortless blend of throat-tearing rage and hypnotic cleans.

Very often when a band “evolves,” the end result falls flat. For Venom Prison and Erebos, nothing could be further from that as they deliver an album that not only proves they’re still one hell of a death metal force to be reckoned with but, when it comes to pushing the creative boundaries of heavy music, Erebos delivers a beating.

1. Born From Chaos
2. Judges Of The Underworld
3. Nemesis
4. Comfort Of Complicity
5. Pain Of Oizys
6. Golden Apples Of The Hesperides
7. Castigated In Steel And Concrete
8. Gorgon Sisters
9. Veil Of Night
10. Technologies Of Death 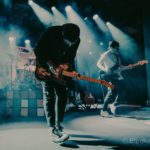