I have, admittedly, been sitting on this record for way longer than I usually spend on review material. And, after countless spins, I am finally figuring out why: generally speaking, an album develops in flavour as I listen to it, gradually blossoming and becoming a cohesive entity I feel confident discussing. Not so with Slow Burning Rage’s eponymous debut, which is a protean entity that never settles into any semblance of equilibrium from which observations can be safely made. Bleach Everything/Iron Reagan drummer Ryan Parrish, the mastermind behind this collaborative exercise in organic mood has made something remarkable here, something that defies objectivity and triggers far more profound responses than any collection of music has any right to.

From the off, Slow Burning Rage is a tough nut to crack with discordant, blaring horns heralding “Agonal Gasp” before descending into a tumultuous, cacophonic percussive assault. An intimidating start to the proceedings, to say the very least – but, after the initial shock wears off, a multifaceted journey of self-discovery awaits the brave, immediately kicked off by the clever call-and-answer rhythm sections, gently building low-end melodies and haunting ambiance that drive the descriptive narrative “The Slow Burn of Madmartigan.” This is probably the easiest to access, most prosaic offering off Slow Burning Rage and my personal choice for a single, but it isn’t the pick of the bunch by any means – there is just so much on exhibition, it is practically impossible to choose a winner.

Whether this is an ode to the Daikini swordsman of Willow, or some entirely other Madmartigan remains unclear. And the storytelling nature of the song is so good, I couldn’t be bothered either way.

The difficulty, though, is actually describing whole songs without isolating standout moments: “A.L.A.S,” the longest track on the record, for example, is a delight of dark atmospherics, but it becomes all too easy to get lost in the thick reverb and cavernous delay on the guitars and forget that these are just one hue in a really dense palette. These evocative textures, loving contributed by Chris Barron, Graham Scala, and Jonathon Moore, are just one example of Parrish’s genius in crafting this album – while he is the primary creative force, responsible for drums, bass, guitar, keys and various electronics, Slow Burning Rage is a communal effort, packed to the gills with alternative viewpoints and additions that enrich the result rather than muddying it. Consider “Dark Thunder…,” a relatively short composition, but one featuring a drum orchestra of over a dozen percussionists as a prime example of Parrish’s skill at blending these various influences, styles and techniques into a convincing single musical argument. The sampled speech overlaid on this, alongside some stirring pads, makes for a great trip down memory lane, evoking early industrial pioneers like SPK, Clock DVA or Throbbing Gristle and their experimental approaches to soundscaping.

One other worthy comparison is evident on “Scaphism (Two boats),” where massive guitars hint at later ’90s industrial, but the constant shift in pace and styles are reminiscent of the B-side offerings of Skinny Puppy, even down to the quasi-breakbeat drumming and harmonic guitar elements. The second half of the song, punctuated by the syrupy crawling bassline further fuels this Cevin Key-ism, as it could believably be lifted off a Too Dark Park outtake.

It’s around the 3:20 mark that things get VERY Skinny Puppy.

Every time I do listen to the record, no matter how invested I become, the point where I really do stop and pay most attention almost always comes too late, however: the album closer, “…Crystal Nebula” is a fairly gentle piece, but the shimmering, crystalline structures Parrish employs – again with overlaid vocal sample texturing – are a dreamlike balm on my soul.

All in all, despite the impossibility of pigeonholing – or even fully understanding – Slow Burning Rage, this is a wonderful and exciting piece of music. It twists, it turns and builds some of the most abyssic ambience I’ve heard in ages. 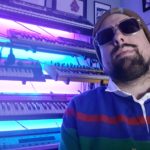 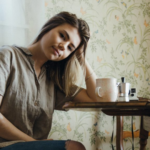