After four decades, it’s incredible to think that a band as utterly uncompromising as Napalm Death offers something fresh and vital with each release. 2020’s offering, Throes of Joy in the Jaws of Defeatism (read our review here), their sixteenth album, was proof of this and, such was its popularity, it was a familiar sight on many end-of-year lists. Heading into 2022, the group, at nearly four decades old, have dropped Resentment is Always Seismic – a final throw of Throes, a collection of covers, remixes and spare cuts from their 2020 onslaught.

As expected, the band doesn’t waste any time getting down to business as “Narcissus” groans to a start before the brakes are released and things head off in more familiar territory. Now, despite those familiar Napalm Death traits running through the core of this mini-album, the Brummie group has always been known as an act constantly tweaking, refining and experimenting with their sound and Resentment is Always Seismic is no different. Even at only eight tracks long, Napalm Death manages to cram every second of those eight cuts with ferocious experimental extremity.

A swirling mass of grindcore, noise-rock, punk and industrial metal, Resentment is Always Seismic straddles either side of the line between controlled ferocity and sense-crushing chaos. This melting pot of extremity is unrelenting in its onslaught as the punk fury of “By Proxy” sits alongside their twisted cover of “People Pie” by industrial headwreckers SLAB!. Putting their own filthy twist on the track, their choice of covers for this EP (the second “Don’t Need It,” a Bad Brains cover) again shows their passion for acts that share their boundary-pushing ethics.

Recently, away from the day job, Napalm mainstay Shane Embury has continued to explore his love of experimentation with one of his many musical projects Dark Sky Burial. Bringing the project in house, Embury puts his own industrial, electronic twist on the final track of the mini-album as Resentment is Always Seismic – a final throw of Throes draws to an end with Embury and his bandmates bringing your world crashing down around you all played out to the kind of boundary-blurring soundtrack that could only come from one band. 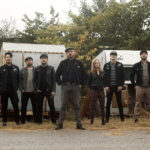 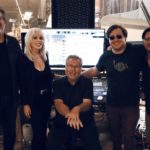