George “Corpsegrinder” Fisher is a husband, a family man, and star of “that Target video” but, to his hundreds of thousands of fans the world over, Corpsegrinder is also the nightmare-inducing voice of one of the most influential death metal bands of all time, the mighty Cannibal Corpse. For now, though, he of the terrifying neck has stepped away from the day job to dabble in the hit ‘n’ miss world of solo albums.

So, were we surprised when the first taster of Corpsegrinder the album came in the form of the skin-blistering “Acid Vat”? Of course, we weren’t. Does that make this collection of head-pummellers short on surprises? Of course, it does. But we don’t care. Corpsegrinder is brutal music at its most over-the-top and those many thousands of fans who worship at the feet of this man (and we count ourselves amongst that mass), would not want the likes of “Bottom Dweller” or “Devourer Of Souls” to sound any other way.

Now, as we should all really know what to expect from the man by now, Corpsegrinder sees the bone-crunching death metal mixed up with a touch of thrash, a dash of hardcore and just the odd breakdown or two which, when combined, as on tracks like the punishing “Death is the Only Key,” the end result is terrifying.

As a taster “Acid Vat” gives a good indication that this collection is going to be a groove-drenched, blast-beat propelled lesson in violence and when Corpsegrinder howls “Bring on the bloodshed…” at the start of “Crimson Proof,” you’d better get those neck muscles loosened up because when that groove locks in you’ll be wishing you had a head holder like the man himself. Aside from the mosh-inducing grooves and the appearance of Erik Rutan, it wouldn’t be Corpsegrinder without his blunter-than-a-sledgehammer-facelift lyrics and this solo album doesn’t disappoint. Both “Acid Vat” and “Bottom Dweller” find the man at his stomach-churning best as he spits about acid baths and torching bodies.

“Vaguely Human” wraps up this magnificent display of brutality in typically violent style. For just over one hundred and twenty seconds, Corpsegrinder will have you pinned against the wall as this crushing death metal assault rains down two final minutes of death metal hell on your gibbering torso.

1. Acid Vat
2. Bottom Dweller
3. On Wings of Carnage
4. All Souls Get Torn
5. Death is the Only Key
6. Crimson Proof
7. Devourer of Souls
8. Defined by Your Demise
9. Master of the Longest Night
10. Vaguely Human 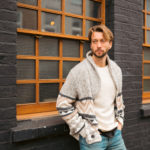