Author & Punisher is Tristan Shone, Tristan Shone is Author & Punisher. More a project than an actual album, Krüller is Shone’s ninth piece of work under the A&P name and, again, sees Shone shredding the limitations of conventional sound. The pandemic gave Shone the time to really explore the machines used to create his work which, along with two friends, resulted in the launch of Drone Machines.

What the end result ends up being is industrial music in the truest sense of the term. Coupled with synths and electronica lifted straight from the ’80s, you get a clinical, gloomy collection of compositions. The tone for Krüller is set with “Done Carrying Dread,” where the crashing sounds of industrial metal collide with the droning gloom that is prevalent throughout this record. The searing “Incinerator” sees Shone take the sound down a more brutal route more akin to Nine Inch Nails at their bleakest where the atmosphere created is nightmare-inducing and wrapped around blasts of abrasive industrial chaos.

While primarily being the inner-workings from the mind of Shone, when he opens the project up to outside collaborations, that is when the real magic happens. Take “Misery,” for example, where Shone collaborates with Tool drummer Danny Casey or “Centurion” where the art-rock legends contribute further to this album by way of an appearance from bassist Justin Chancellor. As you would expect, such a clash of creative mind produces something quite magical with “Centurion” being a relentless industrial stomp while “Misery” sees the collab drenching the cold industrial grind with that ’80s-inspired darkness. Other collaborations see Shone team up with his wife on “Maiden Star,” one of the albums less mechanic tracks.

Described by Shone as “anthems for the decay and self-absorption of today,” Krüller is certainly a bleak, punishing listen. There are times when the material strays into a sound inline with more mechanized elements of recent Fear Factory material but, on the whole, Krüller delivers a solid industrial punch and, coming out through a label like Relapse Records, certainly fits their ethos of working with artists who aren’t afraid to smash down the boundaries of extreme music. 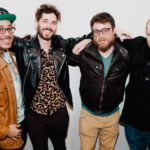