More than just a rock n’ roll band, Trigger Mafia represents a rock brotherhood of four men who are so much more than bandmates. Inspired by the loud, raw, no-nonsense approach of ’70s rock, the band released their debut record The Brotherhood this past October. The band is the ultimate rock revival act, a group of guys who come to you straight from the garage, ready to uplift the world in any way they possibly can.

Along with that vintage ’70s sound, comes a more modern view on music and the world, with the guys all too willing to discuss and shed light on some of the most pressing issues of today. The Brotherhood aims to document the human condition in its rawest form while standing for something that matters. The album’s first single “Find a Better Way” is totally a song from the times, one meant to inspire listeners to organize, start seeing eye to eye, and unite over shared causes and values.

With such a classic sound and a clear adoration of all things ’70s rock, the guys in Trigger Mafia seemed like perfect candidates for a Stereo Six. So we recently linked up with the band to find out six of their all-time favourite go-to rock records that helped in stimulating the writing, and recording of The Brotherhood.

Karl Oystensen (keyboards): “In 1986, my high school stage band won the regional championship and travelled to Vancouver, B.C. for the Expo 86 performances. On the 20-hour bus ride down (and back), I relentlessly listened to my Walkman with The Police’s Synchronicity cassette inside. In listening to that album, I acquired inspiration and ‘Hi-Hat Awareness,’ as I would put it, from Stuart Copeland.

“Yes, I was a drummer. Stuart Copeland helped me realize that drumming provides a musical aspect as well as being a band’s timekeeper or groove machine. His musical implementation of percussion and being a multi-instrumentalist kicked start my keyboard and guitar playing as well. Now, being the keyboard player for Trigger Mafia, with a bit of help and inspiration from The Police, allows me to express a very percussive side of playing piano, synths and especially the Hammond organ.”

Oystensen: “In 1977 my parents returned from Vancouver from a holiday and brought home two records for me. One was Village People by the Village People, and the other was Bat Out of Hell by Meat Loaf. Upon receiving the albums, I asked how they came to the conclusion that I would be interested in the Village People, and my mother replied ‘I asked the girl that works there!’ I then replied, ‘But she doesn’t even know me!’ I took my music quite seriously at the young age of seven, I suppose.

“After using the Village People record like a frisbee and skipping it across the road, I proceeded to listen unstoppably to Meat Loaf’s Bat Out of Hell. The use of rock guitar lead lines, as well as keyboards and rock piano, struck a note within me. The time changes in these songs gave an opera or theme aspect and further captured the listener to concentrate on the epic story at hand. And honestly, the album has some of the most awesome front cover artwork.”

Jay Wittier (bass): “AC/DC’s Back in Black has to be one of the albums that lives in every rocker’s library. From the opening chime of the bell on the opening track of ‘Hells Bells,’ to the last chord of ‘Rock and Roll Ain’t Noise Pollution,’ AC/DC delivers a dish of straight-up rock and roll. As soon as you hear the first power chord, you know the song. This album is a mix of riffs and songs that you can’t stop yourself from grooving to. Phil Rudd, Cliff Williams, and Malcolm Young are in control of the rhythm freight train that bears down on you, while Angus Young and Brian Johnson deliver the knockout punch to the jaw!”

Wittier: “Another favourite for me that had a lot of influence was Metallica’s Black album. It’s impossible to not have bass face or play air guitar when listening to this album. It brought more focus to the songs and production than previous offerings from Metallica while introducing more people to the music. It also was a refinement of their sound that moved from thrash to hard rock. The songs are slower and heavier, focusing less on flash and more on being a tight well-oiled machine. My favourite cuts are ‘Sad But True,’ ‘The Unforgiven,’ and ‘Don’t Tread On Me.’ In my opinion, the band shines on this album, all parts are equal.”

Rod Senft (drums): “‘Hey hey mama said the way you move….’ was the first thing I heard from one of my biggest influences in music, the mighty Led Zeppelin. I was probably around eight years old listening to this iconic album, wearing the vinyl out, on my parents’ big old console stereo, it changed my life. From then on, I searched out and was transfixed on everything they recorded, so actually I can’t really say one album by Led Zeppelin was an influence as it was the whole lot of them, but Led Zeppelin definitely started me on my musical journey.”

Shawn Meehan (lead vocals and guitars): “Van Halen’s 1984 album was the biggest game-changer for me. Before this incredible collection of songs appeared in my life, I was just a kid trying to navigate my way through life. But when I had my first listen through the whole album, I had found my life’s purpose! 1984 is Van Halen at its pinnacle. They had evolved from lower to middle class struggling musicians to becoming the biggest band in the world. Everything about 1984 was as close to perfection as any band could ever achieve. From the space-age intro of ‘1984,’ to the almost metal prog fusion of ‘Girls Gone Bad,’ to the #1 pop smash ‘Jump,’ and the AC/DC-inspired driving tune ‘Panama,’ all the songs on this record are a testament of a well-oiled rock n roll machine in its prime!

“There is no doubt that without this album ever existing, our album The Brotherhood would not sound the way it does. Forever grateful to mighty Van Halen and the biggest breakthrough album of their career, 1984!” 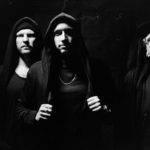 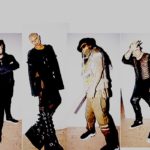