New York City-based band Imaginary People kick off 2022 with the arrival of “Bronx Girl”, a nostalgic, pared down, indie-pop ode to love and chance encounters; lifted from their forthcoming album Alibi due later this year.

Speaking about the accompanying video filmed in Central Park, lead singer Von Wagner says, “As I remember it, in early April 1999 a man I knew was on a film shoot and all day he was mesmerised by this woman. She was playing an extra in this period piece, sort of a 1960s piece with lots of fashion flavour for costumes. Well after he was done, he decided to take a stroll through central park and luck would have it he stumbled on this beautiful woman a little while later sitting on a bench. As she tells it, things became quite surreal as they stared at each other for a few minutes she got up and he followed. After a long adventure around the park they eventually began to walk next to each other and at this point, they still haven’t said one word, nothing. So she finally broke the ice and said, “if we still feel the same way, let’s meet again same day next year at 2pm, same spot.” She then kissed him on the cheek and as she walked away she said: “Actually, make it every year, shit happens.”

Check out our exclusive premiere of the video accompanying this wonderfully nostalgic slice of indie-pop here:

Continuing the tale, the frontman goes on to add: “Later that night the man went out with some friends to see the Arthur Miller play “Death of a Salesman” on Broadway, while she ended up seeing a late showing of the film The Matrix after being stood up on a date. On her way back home, fate would have it she was struck by a car that ran a red light and after a week in critical condition and a brief coma she awoke (she healed up fine). Now, when one awakes from a brief coma, The Matrix isn’t the greatest film to see right before a traumatic, confusing event. As she began talking to her mother she mentioned she wasn’t sure if she had this encounter with this man in the park or if it was a dream, but she did remember the details, date time etc.

So a year later she went back to the bench at 2 pm and he never showed, and she wondered was it true? The next year again, and still he was a no show. Was it a glitch in The Matrix or maybe he met someone else? Then in 2002, she went again and before she sat down on the bench, she heard “Fuck me, It’s true. 3rd times a charm.” And yes, they’re still together, they live on the west side of central park with two dogs and one crazy Iguana named Ralph or maybe it’s Rodolfo. I can’t recall. So in homage to their little romantic cinema, I decided to do a Matrix reenactment cause maybe there was a glitch.”

“Bronx Girl” follows up the album’s pre-release singles, “Soft Oken”, “It’s Simple”, “Hometown”, “Renegade” and “Crazy Eight”. After beginning the promotional campaign of their third album in February 2020, Imaginary People had to hit the pause button due to the Pandemic. Now the band is starting back up with singles from their new album Alibi. Reflecting the times it’s made in, the band’s third full-length, Alibi is, as frontman Dylan Von Wagner, explains, “a response to the cultural civil war that he sees unfolding all across the USA.”

“Imaginary People are just in our own little world,” says Von Wagner. “I don’t think we really participate, we live in New York and it was made here, but we just keep to ourselves. I don’t know where this stuff comes from or why I feel this way and write this shit. I feel like it’s a weird addiction that I can’t shake, and I don’t think any psychoanalysis is going to shed light on it.” 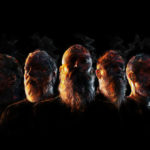 Stereo Six: VATTICA Lists Tracks Integral to the Fire that is the New Single “Gasoline”