Perth, Australia metalcore group Patient Sixty-Seven has unveiled their brand new single, “Scattered.” The new tune follows the recent single “Wayfarer” and was Produced/Mixed/Mastered at Audax Studios by Ryan Botha. Head below to check out the Elliot Charleston-created/directed and edited video.

The band’s vocalist, Tom Kiely, shared some thoughts on the new tune, stating:

“‘Scattered’ is our band’s most ambitious effort to date. The song talks openly and honestly about the hurt, the pain – the burden it places on anyone constantly at war with themselves and their addiction.

“The lyrics depict the ups and downs of trying your hardest to separate yourself from the struggle – but only spiralling more. The chorus talks on wanting to give up, and let go of yourself and those you love because you’ll never be whole. You’re looking constantly in the mirror for answers but only problems seem to surface.” 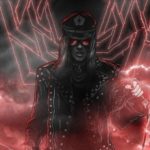