You feel like running away? You want to disappear? You just want to be left alone for a while? Well, we got the anthem just for you, with Mudflower and their brand new single “Another Way.” There’s so much to not like about society at large, and the band embodies that on this new song, heavily inspired by sitting around over the 18 months, locked down, with nothing to do, and nowhere to go.

Hitting all of the right spots about alienation, just like grunge rock did 30 years ago, “Another Way” was born of frustration, of feeling disassociated, and the dream of a world that would work better for all the brooders and introverts out there. It’s idealistic in nature, a musing and consideration of what things would be like if you could have them your own way.

“‘Another Way’ captures the imagination of a dreamer, a reject, a lonely soul desperate to start over. If blues met up with punk rock at a local dive bar, ‘Another Way’ would be the soundtrack blasting on the jukebox and Malort (liquor) would be the preferred poison. ‘Another Way’ should take you far from your troubles.  ‘Another Way’ is your vacation from uncomfortable.”

“Another Way” is the first single to come from Mudflower’s upcoming EP Flore, due for release on February 25th. Flower in Latin, the EP is a reflection of the times in which we live, with songs like “Next Door Blues” a product of the first jam session the band got into after first coming together again after a lengthy time apart thanks to the various lockdowns. It’s probably the most emotional set of songs they have yet recorded, helping the band members return to a certain sense of normalcy again.

The trio first came together in the summer of 2019 and luckily quickly got to work, offering themselves an opportunity to release a few songs before the first lockdown began. Determined to emerge from this period with new songs and better musical chemistry, they gathered at Gravity Studios in Chicago this past summer, coming up with four powerful statements of who they are as a band. Writing and recording Flore has helped Muflower climb out of a dark place, and they hope that it can provide listeners with a flash of encouragement and inspiration. 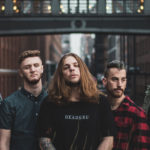 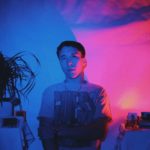