Ontario-based alternative shoegaze quartet Talking Violet just released their much anticipated new album Tell Your Friends You Love Them having spent the last 3 years perfecting their ability to create music that transports the listener to a sonic dreamland.

The Ontario quartet melds the best elements of shoegaze, grunge, alternative rock and dream-pop into a sound that is equal parts an homage to the greats of each genre and an original statement that highlights the band’s mature approach to songwriting. Singles “Superego” and “Indigo” showed the group’s range, from angular ’90s alternative akin to Smashing Pumpkins to lush soundscapes reminiscent of My Bloody Valentine while “Slowdance” and “Delusional” highlight the pop elements of the band along with vocalist Jill Goyeau’s sublime but powerful vocals.

The band has this to say about the release of their new album:

“Really, it’s surreal that this record is finally out in the world. This has been like our secret baby since 2019, with everything that has happened between then and now, it is cathartic to be able to share its story with everyone at last. Tell Your Friends You Love Them is about our friends and ourselves. It reflects a lot on the experience of navigating a world of anxiety while trying to be respectful of others’ turmoils as well. It is a record that wants to be heard but also listen, a lot. We were trying to figure ourselves and each other out in much of the writing process.”

Delving deeper into the inspiration behind the songs, Jill Goyeau gave us a track-by-track rundown on this incredible record.

“‘Gold’ has always been one of my favourite songs to play guitar on, we have been playing this song for a little while now but it always feels new to me for some reason. Nate’s lyrics are super melancholic on it and ‘Gold’ has always felt super resilient to me. By the end of the song, I feel like I can see the sky right in front of me. I can’t imagine it not being the first track of the album.”

“On a literal level, ‘Indigo’ is an illustration of nervousness about performance or anxiousness in general, the moments when you feel like you are surrounded by white noise and can barely tell what your limbs are doing. Looking back on situations like these are usually a blur for me, but I wrote Indigo because the day that I am referring to had so many tiny moments that I found really reassuring and clear to reflect on. It was a crucial time of self-reassurance and growth for me, but of course, that comes with a natural sense of nervousness. I’m glad that in the end, ‘Indigo’ feels like a celebration.”

“Just like everything else we experience, our relationships with people in our lives can metamorphasize over time. One of the hardest things I have had to wrap around my mind is the acceptance of negative change in a person’s character. I truly truly believe the best in people, so even when toxic traits show themselves, I place my bets with assumptions or excuses. I rationalize things that are not mine to unpack. ‘Delusional’ is a song that asks for trust, I think I am both learning to trust myself and others at different moments of the lyrics. It’s mourning a healthier relationship with someone, and the confusion/delusion that comes with that. The song concludes with wishing that person the best, which was added at the last minute actually, we did that on the spot in the studio and that ended up really giving me and song closure in a weird way.”

“Oh, ‘Caterpillar’. I really do love this one. To me, this is almost like the anthem track to the record because of its viewpoint. I think everything about the verses weighs so heavy in an anxious/depressive universe, but it all feels worth the payoff when the chorus comes in. I like that this track validates both a dead-end headspace and the light at the end of the tunnel. I feel like it summarizes the up and down emotions of this record.”

“‘December’ is actually my favourite track on this album! Firstly, I love that all of our voices are on it together since we usually are a little more dispersed. This was one of the songs I vividly remember the feeling of the writing process of. We were cooped up in our studio, it was winter and we were writing ideas straight into Logic which I really like doing. It helps me see the full picture of where a song could go in a clearer way, and from the start, I felt ‘December’ really resonates with me. The lyrics are my favourite of the album, I like that it feels like a natural conversation. I always feel something while singing that track‘s outro.”

“‘Superego’ is probably the most fun track to play live! It’s the heaviest track on the album and super loud and we love jamming it. The tones on this track are reminiscent of some of the tracks from our first EP Round Dreams. Super thick and dark but ‘Superego’ feels very energized to me at the same time. There’s almost irony in its disposition between defeat and ambition.”

“‘Shakes’ starts super subtle and quiet and brews in solitude. It feels like sitting in your bedroom alone at night and reflecting until you can’t sleep. Its chorus is euphoric though and feels like the release and acceptance of that kind of nuance in the verses. The bridge of ‘Shakes’ is always really sonically cathartic for me. I love playing that part with everyone and just letting the sounds hit me.”

“The intro to ‘Bloom’ feels so good to me, I love Jay’s isolated guitar part there and when Jeremie comes in on the drums it feels really exciting. Bloom moves with a purpose but at the same time feels like it’s taking its time and soaking up its environment. I love that it feels like the summer and being with friends.”

“‘Slowdance’ is the ongoing effort of trying to be a comfort for someone else, and the eagerness to see them with peace of mind. It’s having your heart broken for someone else, really. When I understand and witness with my own eyes, emotional turmoil in someone I love, I often take on an internal need to do whatever I can in my power to lift them (something I know a huge majority of people do.) It’s a consuming wish that is desperate and urgent and feels like bare hands fishing through water trying to find anything in reach. Although no one expects this of anyone, it’s hard to turn that mission off in your mind. I’d say that ‘Slowdance’ was a stepping stone on a journey to understanding what I can and can’t control, and an effort of letting some weight off of my shoulders in situations that I typically opt to bear the weight.”

“‘Stay Home’ is special on its own and we ended up having a really intimate time recording it. Just by coincidence, it was raining that day, so our producer Justin had the idea of opening up the doors in the recording room to get the sound of the storm in the background. It was perfect for the feeling of this track and added to the eeriness of it. Its quietness is so comforting with Nate’s melodies. It feels like a lullaby in a way, even with the vulnerability of the lyrics.”

“‘Gold 2’ is like home base, I can’t imagine this song being elsewhere. It sonically feels a reflection of everything that has gone on throughout the record but with a cathartic and chaotic explosion at the end. The instrumental is very emotional for me, I love its bellowing low tones that eventually twinkle in the high end. The repeating gang vocals towards the end with the lyric “they hurt”, were recorded with a big group of our friends. We got everyone in a circle and sang together and it was pretty powerful looking back. This was before we decided the name of the record, but it all makes even more sense now. I’m really glad their voices could be on it, that’ll always be one of my favourite things about this album. Everything comes full circle at that moment.” 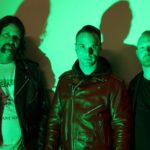