Rob Roth is one of those individuals that you may refer to as a “natural,” as in a natural talent. He’s a person who has consistently demonstrated an ability to learn, apply himself, and pick things up relatively quickly.

Following up the release of his single “Headlines” last month, Roth has dropped “For Me,” a smooth, glossy, R&B-influenced track in which the singer-songwriter reflects on the importance of music in his life and how it has helped provide him with a meaning and purpose in life. It’s all quite impressive for a man who has only been singing for slightly more than two years now.

Explaining the importance of the song to him as a person, Roth said,

“‘For Me’ is the first song that I wrote that truly explored the depth of where I came from and how music was my saving grace. I had endured through an extended period of major injuries and fell into a dark place that held me back from realizing my true potential. Now that I found in music my purpose, I felt a need to highlight how much I have gone through and the doubt I had built inside as a coping mechanism. Finally, I was able to ‘shine a light, on the dark I was coming from,’ and see me for who I really am.

“I hope this song resonates with those who are lost, who have been hurt, who are searching for a purpose. If it can inspire someone to go after their passions and accept themselves for who they are, then my goal would be achieved.”

It wasn’t until the summer of 2019 that Roth took his first singing lessons. He progressed quickly, drawing comparisons to the vocal style of Chester Bennington very early on. Despite his natural talent, a career as a musician wasn’t always the plan for Roth. Although he always loved music, sports and athletics were Roth’s first passions. After enduring six major injuries in five years, including two torn ACLs, a torn meniscus, and two herniated discs, Roth decided to turn the page and try something new. Through all of the rehabilitation, he transformed his outlook on life to be more positive and optimistic, reconnecting with both fitness and music.

Thanks to the pandemic, he was afforded the time to practice and finetune his vocal technique with some vocal coaches that have worked with artists as massive as Dave Matthews, Justin Timberlake, SZA, HER, and Charlie Puth. In a little over a year, Roth has gone from not being a musician to being a talented and highly productive one, with a catalogue of 18 original songs. 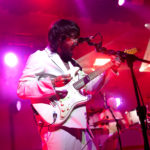