It seems a little cliché to say a band keeps improving with each subsequent record, but it is hard to argue with the trajectory that Mastodon’s albums have taken. Ever since I was introduced to them through 2006’s Blood Mountain, I have been eager to hear what they will do next. And, every time the group takes what they did before, builds and evolves the songwriting in such a way that someone like myself will declare it “their best work to date!”

Yes, that is my view of Hushed & Grim, it is close to an hour and a half of heavy metal/rock with some thrash thrown in for good measure and their most creative effort to date. Although this album does have its fair share of heavy moments, overall, it has a much more sombre feel to it which, in part, could be attributed to the loss of Mastodon’s manager, Nick John in 2018 – this record is brimming with emotion.

Opening with “Pain With An Anchor,” the sorrow of the aforementioned loss is on full display through Brent Hinds, Bill Kelliher and Troy Sanders’ vocals highlighting the grief the collective feel. It is complemented by heavy, yet melancholy riffs that also demonstrate the band’s ability to string together some particularly technical sounds. “The Crux” ups the heavy whilst still weaving in moments of sorrow expertly delivered by Hinds guitar playing. “Sickle And Peace” turns the tempo down and has a cleaner sound to the guitars (at least in parts). The sad tone is still very present, but somehow the tune constructs a juxtaposed element of bittersweet joy.

I have chosen to only outline my thoughts on the first three tracks of Hushed & Grim as it is a record that hits you on an emotional level and it would be a complete disservice to you, the listener, to comment on other aspects of the record. This said, I promise, every song, every lyric and every note makes for one outstanding fifteen-track masterpiece! I have given you a taste, but this time there are no further spoilers. I will just conclude by saying that through a personal tragedy, the members of Mastodon have taken their grief and channelled it into something exceptional that may, in turn, also give solace to others facing any form of similar loss and/or pain. 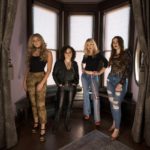