When it comes to recording covers, or remaking classic songs, it can be a lot like operating inside of a tight space. There’s a certain zone you have to function within, or a sweet spot that you have to hit, that’s often elusive or constraining. When you operate carefully and conscientiously though, the results can be extremely satisfying and worthwhile.

Rock artist Borrowed Sparks, aka Mike Bay, took the perfect approach to “Refugee,” one of the legendary Tom Petty’s many, many hit songs. The song sounds just enough like Petty to not turn you off, but different enough to intrigue you, and make you feel like you’re hearing something novel and unique. It’s about capturing that right charm, and that’s exactly what Bay has done without sounding the least bit redundant.

Explaining his decision to cover the song with his band, Bay said,

“We started talking about doing a cover and ‘Refugee’ just clicked right away. It only took playing it at a couple shows before I knew we needed to capture the magic and the only way to do that was to cut it live. Not only loving Petty’s songwriting but also the sound of his records doing it live just felt like the right thing to do. It took some work, but I’m definitely a better musician and singer because of it. I idolized Petty growing up so there was never a question of if we were going to do a Petty cover, just when.”

“Refugee” serves as the first single to The Smoakstack Sessions, Borrowed Sparks’ upcoming live EP. Named after The Smoakstack, the legendary Nashville studio in which it was recorded, the EP was tracked over one long, hot summer’s day this past June. Recording at The Smoakstack provided the necessary atmosphere and energy to make this a very worthwhile listen, helping to remind fans of the value and the magic of live music with the industry mostly on ice for a year and a half.

Funnily enough, it has been within this timeframe that Bay has really started to emerge, with his debut release The Prettiest One Left dropping back in the spring of 2020. Upon its release, the record really began to find an audience amongst fans of Americana, traditional rock, and even punk. It’s been a long time coming, but Bay is now happily able to tour behind the record, with his mix of classic Americana storytelling and angsty punk rock resonating with audiences across the U.S. 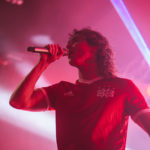