Are we going to shine brightly, or burn into a pile of dispersing ashes? That’s the key question at hand today with songstress Ariel Bellvalaire and her brand new music video for “Diamonds or Coal.” Along with exhibiting the brilliance of Bellvalaire on her electric guitar, the video introduces you to Ariel and the relationship she has with her best friend, Gucci, her hairless Guinea pig.

There’s a whole storyline at work here, with the video leaving you on a big of a cliffhanger at the end, but there’s no doubting the energy and gravitas that the singer/songwriter brings to the table. More an anthem than just a song, “Diamonds or Coal” is about demanding to know where you stand in all of the craziness that surrounds modern relationships. With its pop-rock appeal, it’s a very relatable song and features a masterful guitar solo delivered by Bellvalaire herself.

Explaining the intention behind the song, Bellvalaire tells us,

“‘Diamonds or Coal’ is about a relationship that could go either way, you could shine forever like diamonds or burn up and end up being coal.”

Coming from humble beginnings in the town of Windsor, Connecticut, Bellvalaire began receiving accolades for her musical abilities at a young age. In what was her on-stage debut in 2014, she was already performing on Broadway in the Dearly Beloved Prince tribute show, which featured  Tony winners like Lena Hall and Robin de Jesús. By 2015, Bellvalaire had moved to Los Angeles where she found success appearing in commercials for GMC, KIA, and Kentucky Fried Chicken.

She is now primarily focused on creating her own original music which audiences have really started taking to. Her recent single “Elastic” and its accompanying music video gathered widespread attention, thanks in part to the wild video which features Bellvalaire, also an accomplished aerial acrobat, performing eye-opening stunts while wailing on her guitar. Talented and engaging well beyond her years, things are looking way, way up for Bellvalaire, as she shifts her focus to now recording her debut full-length album. 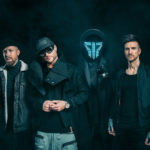