There is a queue stretching right around the block as Sheffield rock favourites Bring Me The Horizon kick off their Post Human UK arena tour at the Bonus Arena in Hull just an hour or so down the motorway from where the band grew up as a bunch of deathcore troublemakers.

Here we are over a decade later as the band, one of the few success stories from the “Myspace” era, kick off their first UK tour in eighteen months and bring with them two quality support acts for the run. First up, and sadly on and off by the time we’ve parked our car and got into the venue, punk rock duo Nova Twins have the luxury of warming up this crowd who, by the time, Surrey alt/rock crew You Me At Six are smashing through their set, are well and truly getting into the spirit of things.

Plunging into their extensive catalogue, Josh and the band is as slick as you’d expect them to be at this stage of their career. “Underdog” and “Reckless” rattle around the rapidly filling room, as frontman Josh explains how jumping on tour with the headliners was a bit of a no-brainer and exit stage left having made sure the headliners are going to have to be on their A-game to follow that. 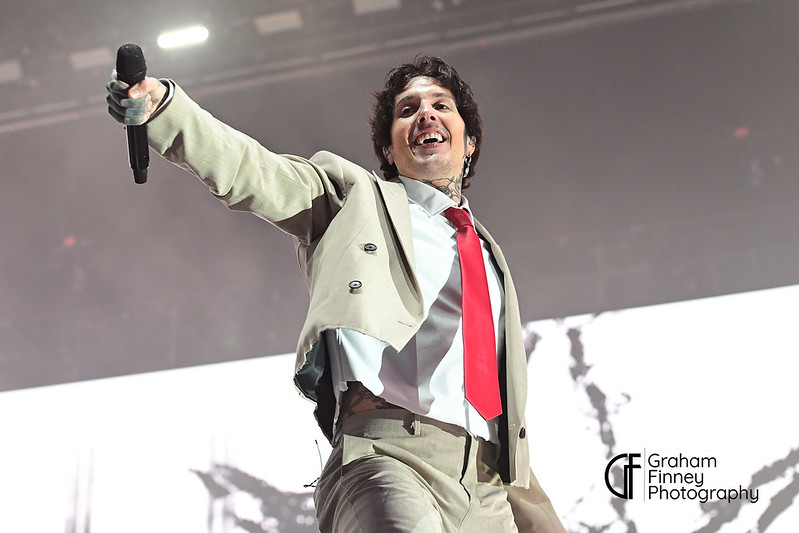 Having dropped their alt/rock/pop Post Human: Survival Horror album last year, this is the first time most of the songs in the set have had an airing in front of fans. Streamers fire out across the arena as the band makes their entrance and into opener “Teardrops” while “MANTRA” features retina-burning LED displays. A ball of energy, frontman Oli Sykes races from one side of the stage to the other whipping the three-thousand plus strong crowd into a frenzy.

Kicking things up a notch, an animated LED screen drops in front of the band as animations flash across it during “The House Of Wolves.” It’s an impressive sight from wherever you are in the venue but, as the group are joined on stage by robotic dancers during “Happy Song” and dancers firing CO2 over the crowd during “Parasite Eve,” you get the feeling that this is only the start of it and as things escalate throughout the set, that assumption would be correct.

“Dear Diary” sees Sykes hunched over like Yorkshire’s equivalent of Trent Reznor as the band spit through the thrash/pop onslaught while the horror-pop of new single “Die4U” gets an airing midway through the set. Ridiculously tight for a group that hasn’t played live in eighteen months, even when they slow it down for an acoustic rendition of “Follow Me,” the experience is truly hypnotic. Wrapping up a mammoth nineteen-song set, the Sheffield crew cruise through “Obey,” “Throne.” and “Can You Feel My Heart” as the opening night of this run ends in truly apocalyptic fashion.