A Day To Remember (ADTR) has kicked off “The Re-Entry Tour.” After almost two years off, the band is headlining dates across the United States with Asking Alexandria and Point North. The Ocala, Florida natives had played a couple of tune-up dates before embarking on the nationwide trek. Aside from a few festival dates, the first headlining show since 2019 for ADTR was at the PromoWest Pavilion at Ovation in Newport, KY. The Ghost Inside and The Devil Wears Prada joined them as special guests.

The PromoWest Pavilion at Ovation is a new venue to the area and is already in contention to be one of the best. The weather was perfect for a late summer outdoor concert with the Cincinnati, Ohio skyline in the distance. Whether you prefer to hang at the rail or chill in the back there isn’t a bad seat in the house.

The Devil Wears Prada (TDWP), from Dayton, Ohio, opened the show with their ferocious brand of metalcore and mixture of post-hardcore. This was one of their first shows back in front of a live crowd as well. Unfortunately, they could only play an abbreviated set of four songs. Their drummer Giuseppe Capolupo was hit by a drunk driver four days before the show and suffered a fractured hand. Luckily, Dylan Watt was able to step in on their short run of shows to fill in.

The set opened with the live debut of “Nightfall” from their latest EP, ZII. It also featured one of their most-streamed tracks, “Chemical,” off 2019’s The Act. TDWP has been rocking crowds for over 15 years and they still have a unique intensity when they hit the stage. On the horizon for TDWP is a U.S. tour supporting We Came As Romans this fall, and tickets are moving fast. They also have some new music brewing after recently releasing, Sacrifice, a stand-alone single for now.

Since their official return from hiatus in 2018, fans haven’t had a lot of chances to see The Ghost Inside (TGI) live. Even with the time off, fans still gave the Los Angeles-based metalcore act a warm reception, singing loudly to the opening track, “Engine 45.” The 10-song set featured several songs from their latest self-titled release and cuts from Get What You Give, and Dear Youth. If this short run of dates is any indication, The Ghost Inside will be back on a full tour run sooner than later. 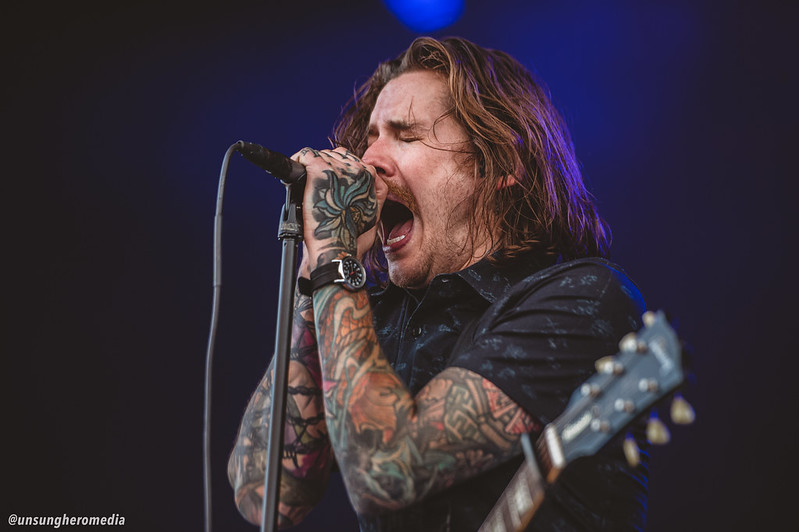 Even for a one-off date, A Day To Remember proved that they are still the Kings of The Scene with a damn near perfect set. Song selection was on point, production was spot on, and the sound was flawless. Beach Balls, confetti cannons, and toilet paper all went into the fun. Lead singer Jeremy McKinnon told the crowd this was his favourite show in years.

The set almost spanned their entire discography and featured 18 songs including the hits and a couple of deep cuts. This is the first time that tracks from 2020’s You’re Welcome have had a chance to make a live debut. TDWP’s Mike Hranica joined the band on stage to perform his part on “I’m Made of Wax, Larry, What Are You Made Of?” from the 2009 metalcore classic Homesick. Towards the end of the show, McKinnon dedicated the set to their crew who barely got any sleep while in transit to the venue because of travel complications.

A Day To Remember is a band you have to catch live at least once. For the music and the energy they give and receive from the crowd. Walking out of a show like this makes you cherish the power of live music. 15 years ago, all three of these bands were playing churches and small clubs. Fast forward to now and they are filling pavilions, auditoriums, and festivals. And that is a testament to the work they have put in for the fans that have continued to support them over the years.

A Day to Remember 2021 Tour Dates with Asking Alexandria and Point North: