For 15 months, Birmingham band Lovebreakers have sat patiently waiting to release their debut album, Primary Colours. On June 25th, via Wiretap Records, the record finally saw its release so we caught up with Jack Perry to find out more about the record, how challenging the last fifteen months have been, and what the future holds in store for them.

Thanks for your time, how’s life treating you at the moment?

Jack Perry: “Yeah great thanks, finally starting to see a light at the end of the tunnel with live music.”

So, the album is finally out, what are your plans for it now life is returning to normal?

“Tour, tour and tour. We are trying to book as many live shows as possible and get around the UK/Europe.”

On that theme, you’ve talked about the album having an element of hope running through it. What has kept you going as a band over the last 15 months?

“We’ve stayed really productive. We wrote most of our second album which is most likely going to be recorded early next year. We’re not really a band who likes time away from playing music. Because technology is so accessible, we have been demoing and writing remotely.”

For a band, at the stage you’re at, what has been the hardest thing about the last 15 months?

“Having a debut album ready to release in the wild, to then sit on it for over a year and a half has been hard, but a lot of artists have been in similar positions, I guess. We were ready for a summer European tour with Social Distortion which had to be rescheduled twice.”

As we said though, the album is out and life could start to return to normal in a few weeks. What are your plans gig-wise?

“We want to arrange a local headline show then try and get on as many tours as we can.”

Let’s go back to 2017 when you all met. How did that happen and how were those early days?

“So I initially had a few years out from music and started writing songs again in 2018, looking for a band. Myself and Christian go way back in terms of playing in bands around Birmingham so we started chatting about having a jam. Christian brought along a drummer he knew and the band kind of grown from there. We were originally a three-piece for about six months before getting Cheeno (our lead guitarist) in the band. Both Christian’s and Cheeno’s moms’ are good friends, so it came about pretty naturally. We found Nathan (our new drummer) from a post we put out online, looking for a new drummer. I think his dad told him about us and said, ‘these guys are cool’ (laughs). Nathan is from the Black Country (the same as me) and was a perfect fit. We all hit it off straight away.”

Music is usually a common theme between friends, is that the case with you? What common musical loves do you share on your Spotify playlists?

“Timeless rock n’ roll. Bands such as The Replacements, Tom Petty and the Heartbreakers, Queen etc… We love music that still stands up today and that’s the main ethos of our band.”

You formed in Birmingham. What has the effect been like on the music scene there?

“A few venues have shut down which sucks, but some venues did online shows to raise money which we were proud to be a part of. I think everyone is itching to go to a show again.”

Luckily, given the lockdown, you got the opportunity to go out to LA to record the album. What was that like? Any good stories you can tell us?

“We had the time of our lives. Looking back at what we achieved, we have definitely learnt a lesson to never take anything for granted. Having the opportunity to fly to LA and make our first record was an amazing time. We were so lucky to have the chance to do it and it was an amazing experience. We still all pinch ourselves sometimes because we had so much fun and made a great record in the process. We rented a beach house on Newport Beach and woke up to palm trees and California sun every day.

A good story? We ended up at a house party in Oakland singing crazy songs on a karaoke machine and we got introduced to a guy at the party. We got talking to him and he mentioned that he was a drummer. We said jokingly that, ‘oh, one day you could come to play with us when we come to tour America.’ Little did we know, it was the drummer of Guns n’ Roses (laughs).”

From a band of friends in Birmingham to recording an album in LA, was that something you’d ever dream would happen and what were those ambitions back in the early days?

“I think our ongoing ambition is to just carry on enjoying what we are doing. Were all determined to push our music to the masses but if you don’t enjoy it, there’s no point.”

What about moving forward then? What are your goals and ambitions now you’re making up for lost time?

“We’ve nearly finished writing our second record, and will be looking at recording this in early 2022.”

You’ve talked about hope and similar themes on the album, what’s the most important lesson you’ve learned as individual people, friends and as a band over the last 15 months?

“Patience. I think we all kind of expected the band to hit heights quickly with the record being out and tours being booked. However timing is key, and having patience is more important.”

Thanks for your time and good luck with the album. Over to you to wrap things up…

“Thanks for listening to our record and please continue to support our band. We’re aiming to be around for a long time.” 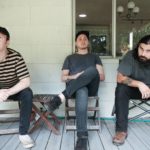