Don’t be a sucker, ok? Unless it’s for alternative rock and hip-hop, then it’s ok to be as big of a sucker as you want. Katastro is a fast-growing quartet that is really starting to get the attention they deserve, with their inventive take on modern alt-rock and hip-hop. Their sixth studio record, Sucker, was just released on July 16th through Silverback Music’s Controlled Substance Sound Labs, arguably their most mature record to date. It features a noticeably more developed sound that splendidly blends together the band’s fondness for rock, rap, funk, blues, pop, and reggae.

Based in Phoenix, Arizona, Katastro used the unwanted time off of 2020 to really go wild when it came to investing in their musical potential. A fully collaborative effort, Sucker is twelve new songs about the recurring loop of life, love, and hate, and the desire to break free from that routine. There’s a summery sound to the songs, particularly the lead single “The Way I Feel,” which is a more positive ode of how to get over a bad breakup.

With a new album out and the band riding a wave of positive momentum, Katastro joins us today to share a Top 10 list of the most important bands that helped in shaping their sound and career as a musical unit.

“There are many reasons why the Dirty Heads were super influential for us as a young band starting out. The first sold out shows we ever played were opening for these guys in our hometown. Every time they came back to Arizona, they would have us open for them and that eventually led to us touring across the country with them for our first huge national tour. Becoming friends with them and then being able to witness them gain success was very motivating for us at a young age.”

“The Chili Peppers were a staple for us when we started the band. We had a TV in our first van and we would watch their Live At Slane Castle DVD before going into a venue to play a show. Their musicianship as a band has always blown us away. When you listen to our discography, I think it’s obvious that we have been extremely influenced by them over the years.”

“Touring with Pepper was such a rad experience. They taught us how to always respect the people that come to your shows. There is a reason these guys are still out there killing it and have a loyal fanbase. They leave it all on the stage and don’t mind going out of their way to make fans happy and let them know how much they appreciate them.”

“In the summer of 2019 we did a full summer tour with these guys. They treated us like family on that entire tour and we gained thousands of new fans. When you are gone for a few months traveling the road, it’s really important to be surrounded by good people. These guys rule.”

“(laughs) Oh man, possibly the most difficult tour we have ever done in our career was with these guys. We went out on a two month winter tour with these guys back in like 2016 and it was the most brutal driving conditions ever. The shows were incredible but we were the only band in a van following a bunch of buses. We gained many experience points on this one! A bunch of skinny dudes from Arizona trying to survive the winter across the entire country.”

“In high school, we saw these guys live a few times. We couldn’t believe how musically talented they were. They really inspired us to try new things and think outside the box when it comes to writing songs. …And The Battle Begun is still insane every time we turn it on!!”

“These guys brought us on our first tour. They showed us the ropes and helped us out big time when we weren’t making any money and selling merch to make it from show to show.”

“One of Stravs’s favourite drummers ever is Zigaboo Modeliste from The Meters. These guys have such a unique sound. A big reason why we have funk in our sound.”

“We used to watch the Incubus’ Alive at Red Rocks DVD in high school after practicing in (drummer Andrew Stravers) Stravs’ garage. Incubus has so many different kinds of albums and we always enjoyed how they would evolve between albums.”

“Atmosphere was a huge influence for us when we started out. We connected with how real his lyrics are and his storytelling. We saw them sell out our hometown theatre a few times and got to play a festival with them a few years back. Super nice dudes!” 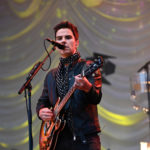