Five-time Platinum-certified songwriter and critically acclaimed artist Andreas Moe explores the spectrum of emotions that come with tumultuous relationships in his new single, “You To Me,” which was released on August 27th. This single tells a story of uncertainty; the moment of realization that a relationship is at the beginning of the end evokes feelings of dread, grief, and at times, frustration. For Moe, this song represents a “sickly, scary feeling when you realize that you do not know where you stand with a person who has previously been a safe space for you.”

Led by an ominous, unassuming guitar, this track embodies that same trepidation the Sweden-based artist described when a relationship loses its footing. Moe’s performance – haunting, delicate, and filled with passion – brings these lyrics to life by injecting them with the pain of drifting away from a once unwavering love. “You To Me” serves as the introductory lead single to Moe’s highly anticipated album releasing late September.

Andreas Moe boasts over half a million Spotify listeners with several of his singles charting over 10 million streams. Moe’s discography includes multiple chart-topping EPs (UK singer/songwriter charts) and several collaborations including a featured vocalist spot on Avicii’s single “Fade Into Darkness.” As a songwriter, Moe’s songwriting credits can be found on the Platinum-selling albums of international artists such as Cheat Codes, Sabrina Carpenter, Tiesto, Tinie Tempah, Omi, Boyzone. His songs have been featured on American Idol, with 3 finalists choosing to sing his tracks on the show, the latest winning single on the Voice of USA December 2020 is a song called “Up From Here” written by Andreas, and Universal Pictures featured 4 of his tracks in their 2012 film The Knot. 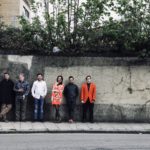