The worlds of Western and Eastern music are on a direct collision course on singer and songwriter Abby Ahmad’s brand new single “Find Out.” The NYC-based artist has debuted her brand new music video for the song, devised, directed, and edited entirely by Ahmad herself. The clip pays special tribute to her heritage, as she can be seen wearing a Palestinian thobe passed down to her by her paternal grandmother. She can also be seen interacting with Matryoshka nesting dolls, given by her Eastern European Jewish maternal grandmother.

The song itself was influenced heavily by kirtan chants and Middle Eastern and South Asian classical music. It’s all very representative of who Ahmad is as an artist, a young woman who grew up in rural Pennsylvania on classic American folk and singer-songwriters such as Richie Havens, Joni Mitchell, and Ani DiFranco, as well as the music of her ethnic background and culture.

Commenting on the single, Abby shares, “‘Find Out’ embodies the cyclical nature of one’s own questions and thoughts, with a noticeable reverence for kirtan chants and Middle Eastern / South Asian classical music. In its repetitive refrain ‘And we find out / And we find out,’ I announce my desire to root and grow with listeners, as each song on my recently-released album Tea with Shadows sprouts from its intimate core — the exploration of the self, its shadow, and compassion. ‘Rest now, child / The tale, it is true / Self-subside / My aim is to kiss you.’”

As for the video, she continues by adding, “The video for ‘Find Out’ explores several personal themes, where I summage my heritage – wearing a Palestinian Thobe passed down by my paternal grandmother alongside my explorative play with Matryoshka nesting dolls from my Eastern European Jewish maternal grandmother. These identifying cultural folk objects of significance wade in similar themes of maternity and nurturing, which I offer to myself and my audience. Cinematography was done by myself and my husband/musical partner Mark Marshall (who co-produced and performed on the entirety of the album). All the visuals are intentionally set in the darkness of the forest with the intensity and the fuel of fire as a healing and purifying presence, a constant visual reminder to urge listeners to join me on my journey.”

“Find Out” is one of the many high points on Ahmad’s brand new record Tea with Shadows, which was released last month, via Detour Music. Driven by a deep fascination with the human psyche, the album’s 13 tracks represent a confluence of all of her emotions in one. The album is a self-study in fear, loss, comparison, and doubt, which are informed by more external curiosities about hope and empathy. The songs really promote a certain level of self-reflection and encourage the listener to look deep within to understand more about themselves on their path to personal discovery.

One of the most unique elements of Tea with Shadows is the influence that post-modern poetry has had on Ahmad as a songwriter, with many of the lyrics featuring a lot of vocal wordplay. She has a special affinity for alliteration, rhyme scheme, and word choice, which you’ll discover as you listen more closely to each song. An exceptional piece of work with unmistakable originality, Tea with Shadows shows why Abby Ahmad is not just your average pop artist. 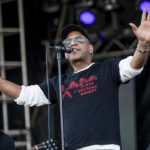 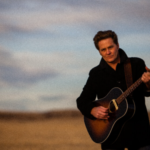