As we head into a new era for live music with the return of live shows and festivals, metal fans across the UK will be heading to Catton Hall this weekend for five days of metal, punk and hardcore at Bloodstock Open Air. Despite a drastically changed line-up, the festival still features three weighty headliners in Devin Townsend, Kreator and Judas Priest along with a host of established and up and coming acts.

With plenty to be excited about ahead of this weekend, V13 takes a look at some of the new breed of bands heralding in this new era for live music. See you in the pit!

– Meeting at a gig in Camden, punk duo Wargasm UK consist of international model Milkie Way and Sam Matlock, a D.I.Y veteran. Having already laid waste to the mainstage at the Download Festival Pilot earlier this Summer, the energy and magic sparked when these two strong personalities collide promises to offer something a little different to the Bloodstock crowd.

– Mixing classic and modern rock, you can pick out plenty of influences in the sludge/tech-metal and doom riffs of Urne so, if your ear gets turned by the likes of Mastodon, Alice In Chains, and Metallica, then this trio are going to be worth a few minutes of your time when they pummel through tracks from their Serpent & Spirit debut.

– Comprising of five teenagers from Essex, Beyond Extinction promise to lay waste to the New Blood Stage with their deathcore mix of beatdowns and anger. Having only been together a few short years, hearing this Essex quintet crush through their set, gives you plenty of hope that the new UK breed are keeping the scene in safe hands.

– Emerging from the depths of Suffolk, home to UK black metal titans Cradle of Filth, this well-seasoned group features both present and past members of Devilment, Failed Humanity, The Conflict Within and Cold Lazarus. Expect a dark, sinister, twisted end to the weekend as the witch county band bring the New Blood Stage to a dramatic and undoubtedly epic close.

– This Midlands based alternative metal band draw influence from the likes of Karnivool, Deftones and Toska. This year has seen them perform at a private function at Aston Villa FC for Tony Iommi and Geezer Butler honouring Butlers induction into the Birmingham Walk of Stars and their rise will continue as they hit Bloodstock this weekend to perform tracks from their upcoming debut album.

– Off the back of a number of well-recieved singles in 2019 and 2020, hard rockers Cottonmouth had already started to take their local grassroots rock scene by storm with their catchy hard rock anthems. With live music slowly starting to return where better for this rising hard rockers to kickstart their 2021 than at Bloodstock in front of a crowd ripe for the picking?

– Hailing from Ireland, modern metallers Words That Burn have already landed gigs with heavy-hitters like Alien Weaponry and Beartooth. Armed with Pyres, their current album, the Irish outfit are making their way to Bloodstock for the UK debut so, if you’ve got a space in your schedule on Sunday, you’d be wise to get a spot for these boys and their metallic anthems.

While the name Necronautical has been around the UK Black Metal scene for a number of years, the project has gone through a number of incarnations during that time. Set to release their epic new album, Slain In The Spirit through Candlelight Records on August 20th, the band will mark their return to the live stage with what they promise to be a set of epic and immersive black/death metal. Miss them at your peril. 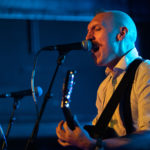