In North America, where EPICA’s concert draw is less than their European shows, there has always been an underlying feeling after leaving their live events that it would be amazing to see them with an unlimited production budget. Ironically, it took a global pandemic to bring that possibility to life. Presented as a Global Online Event on Saturday, June 12th (and on-demand for 72 hours afterward), Ωmega Alive brought that unlimited production value to life. Created amidst a world in turmoil with a cataclysmic change in society, EPICA still created its most spectacular album ever with Ωmega. Fusing elements of metal and orchestra, choir, and oriental instruments into an album rife with impressive crescendos. Ωmega features material with specifically written suites for orchestra and choir and boasts a wide range of eclectic instruments recorded worldwide by some of the very best native musicians.

After the release of Ωmega, there were no prospects of touring for the band. They got together with Jens de Vos from Panda Productions and came up with a way to bring the EPICA experience into the fans’ homes worldwide. Anything written here will sell Ωmega Alive short. For that, I can only apologize; the show featured more pyrotechnics, orchestration, choirs, acrobatics, and production than anything I’ve seen attempted to date. Cobras made out of metal, standing 20 feet high and blasting flames overtop of the band? Yes. Flames blasting out from the stage in all directions? Yes. Multiple remarkable wardrobe changes for Simone Simons throughout the set? You bet. Cirque de Soleil styled acrobatics as songs are performed? Indeed. Choirs and flame swinging gymnasts? Also present. That moment at the end of Ωmega Alive where ALL of these things are happening at the same time? Nothing short of epic(a).

The best part of this stream was a subtle reveal towards the end of the event where Simone Simons acknowledged their 20th anniversary and thanked fans for sticking with them for so long. While she was doing this, a couple of wide shots show the production happening around the stage they are on and all of the personnel around them bringing this event to life. It was like a magician showing their hand. 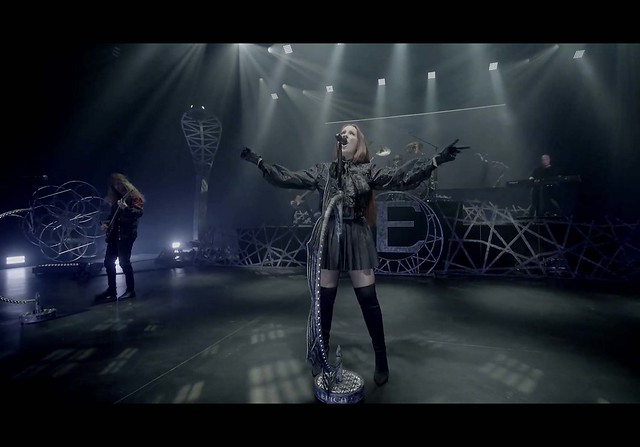 Presented in conjunction with Danny Wimmer Presents, Ωmega Alive is another high-point showcasing what a live presentation can look like when performers can’t perform live to a crowd. Sure, a part of me wanted to be there to bathe in the smell of butane and smoke with thousands of other like-minded individuals. But the dollar value attached to a production like this is so high that EPICA could never take it on the road without losing money. Kudos to EPICA, Panda Productions, and Danny Wimmer Presents for bringing it to the world in this fashion. There is no way this presentation WON’T see some release down the road on Blu-ray and DVD. Fans that saw it will want to own it, and people that didn’t watch the stream will get a chance to witness what they missed.

About EPICA: Ωmega is an album of unity, friendship, and the members’ close bond. An album that naturally came together as a group effort. And no wonder: Mark Jansen, Simone Simons, and keyboard player Coen Janssen have been playing together since EPICA’s conception in 2002, with drummer Ariën van Weesenbeek joining as early as 2007, lead guitarist Isaac Delahaye following in 2009. In 2012, bass player Rob van der Loo marked the latest addition to their ranks. For eight years, three records, and hundreds of gigs, this band has formed an indestructible unit. EPICA is now looking to bring Ωmega to live venues around the world.