Aside from maybe cars and motorcycles, is there anything that the city of Detroit is known for more than garage rock? Since the 1970s, the Motor City has become a haven of garage rock, and here to add to that legacy are The Stools and their brand new single “Bread and Butter,” originally written and recorded by the 1960s American pop vocal group The Newbeats.

A drastic difference from the original, The Stools’ version of the song shows just how versatile this band can be. They have completely reinvented the song to fit within their style of music, with a rough, detuned approach, shrieking with as much feedback as you can handle. You’ll discover “Bread and Butter” and more on the band’s upcoming Live at Outer Limits vinyl release, due out May 7th on Big Neck Records.

On why they decided to cover the song, singer and guitarist Will Lorenz told us, “The ‘Bread and Butter’ cover came about because I heard the song on the AM oldies station and was amazed that such a dumb concept for a song with equally dumb delivery could be such an earworm and a classic. I usually don’t like to learn covers because I feel awkward singing other people’s lyrics but I couldn’t resist a two-chord jammer with helium vocals about toast and infidelity.”

Joining Lorenz in the band are the very capable rhythm section of Krystian Quint and drummer Charles Stahl. Brimming with potential, the band has already received the recognition of Detroit legend Jack White and his Third Man Records, with their 2019 EP When I Left being issued on the label. Live At Outer Limits will include three songs, all recorded during an encore that has never before been heard.

With so much change in the world, it’s nice to know that some things never change, namely the city of Detroit continuing to produce some vintage garage rock! 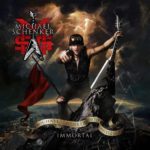