Hailing from Los Angeles via the UK and France, So-Cal hard rockers Levara are set to release their debut album through new home, Mascot Records later this year. With an MTV-inspired video for the recent single “Heaven Knows,” and plenty more to talk about ahead of the release of the album, we spoke to Levara vocalist Jules Galli to get the inside story.

Jules Galli: “You’re most welcome, thank you for featuring Levara! Life is good, today seating in the garden on a beautiful SoCal afternoon, newborn daughter by my side. Feeling blessed.”

Could you give us a brief story into how the three of you met and eventually evolved into Levara?

“It all started with a song, no strings attached, just for fun. (Guitarist) Trev (Lukather) and (drummer) Josh (Devine) were roommates at the time and wanted to create a badass rock song. The instrumental was definitely badass, and in need of a singer. They liked what I wrote to it and decided to cut it in the studio. There was the first time I met Josh, while Trev and I had met a few times in the Hollywood live music clubs. One song led to a few more, and we decided to commit ourselves to this new project, at the time called a different name. We toured with that ‘embryo’ and found ourselves in Europe, opening for Foreigner, when our song ‘Automatic’ came to life in the Green Room, on an acoustic guitar and cajon. We didn’t think much of it, but thankfully recorded this new song idea on an iPhone. This was the beginning of Levara.”

And how did Mascot Records become involved in the story?

“When we came home after our European tour, we needed to get in the studio to raise the bar with the experience we acquired on the road. ‘Automatic’ was one of them, and once we built it in the studio, it was clear that we had found a new vibe. It was a good spot between rock and pop, it was big and memorable. It was everything we wanted it to be. That’s when Mascot heard it and thought the same. It is with this song that we started a conversation with the label into signing us and making our debut album a reality.”

Let’s talk about the first video and the homage to early MTV Takeover. What are your memories of those MTV days?

“Ha, yes, ‘Heaven Knows,’ that was a fun shoot, even though Josh was back in the UK, we made sure to drink for three in his honour. MTV was always on at home, before and after school. I was in France at the time and that’s how we received all the American and British music videos. I remember when Jamiroquai was sliding across the dance floor and U.S. hip hop started to take over. The old school MTV days came way before my time, but ‘I want my MTV’ has always been my jam!”

Going back to those early days, if you had to pick one group from that era that you’d love to have been part of who would you pick and why?

“This is tough question… I wasn’t born in those early days, and there are so many good bands that blew up on MTV, but on a personal level, I’d have to go with Jamiroquai. Their album A Funk Odyssey was the first album I ever owned and really established my love for pop music with great musicality, the grooves were spectacular and the videos always made me want to move.”

Trev also talked about capturing “the Miami Vice” vibe. Who is the sharpest dressed member of Levara and who has the worst fashion sense?

“Ha, I remember it all starting with the colored Sandro suits. We wanted to wear something bright and elegant at the same time. Jake had this idea about the old school TV set and boom, we got this slapstick MTV vibe. I can’t answer this question, fashion is all subjective… (I am the sharpest dressed man of course).”

The track is the first song on the album. Can you tell us about some of the other songs on the album and the inspiration behind them?

“We always try to write from a place of truth, pulling from personal life stories, or an inspiring story that needs to be shared. One song that comes to mind is ‘On For The Night.’ We have a fan who wasn’t feeling good and had suicidal thoughts. She had no one to turn to and emailed the band. We decided to write a song about her story and anyone going through this. We can’t change the world all at once but we can make music that hopefully changes someone’s life for the better.

‘Chameleon’ is another song about living a better life, breaking our own chains to be free of prejudice, judgement and finally being able to show your true self. I brought a few books to the studio to get inspired and one of them was titled Chameleon Aura by Billy Chapata.

‘Just A Man’ is our oldest song on the album. We wrote it when we were still ZFG and performed it live a lot. Alongside ‘Automatic,’ we recorded it after a major rewrite and got Mascot’s attention with these two songs. This one is very classic rock, huge chorus, screaming guitar solo, mid tempo and very powerful. It’s a self reflective kind of song, about growing up into a man, the hardships about masculinity and being in touch with your emotions all at once. It’s cool that one song (half of one) from our ‘embryonic phase’ made it on our debut album. You can find the whole evolution of who we are as a band in this body of work.”

You also talk about the track asking what’s stopping you reaching your ultimate potential. What are your ultimate goals as a band?

“‘Heaven Knows’ is a great way to open our album, and most likely will be a great opening song for live shows. It’s got the right upbeat vibe, and the message to push past your limits. Our ultimate goals as a band is having long lasting career, uplifting people and creating as much music as possible, with a quick stop at Madison Square Garden, Wembley Stadium, and the Rock n’ Roll Hall of Fame.”

Pre-pandemic you had an arena tour and European dates both hugely successful. How would you sum up the last twelve months for you and how has the pandemic changed your plans?

“What a year we’ve all had… it’s been challenging but I can say with confidence that we have been favoured by timing. We finished our album right on the first day of LA lockdown and are all fortunate to be healthy so that’s a huge blessing. We have to be patient and optimistic that we will soon be able to tour and meet people face to face.

In the meantime, we were able to create more visuals and content to share with the world since our album release got postponed for obvious reasons, thanks to Mascot for seeing the importance of music videos to help share our story. It’s like we created a beautiful baby but are still incubating… it’s weird but it is what it is. Almost there for the album release and hopefully some shows in the near future.”

You emigrated from France to LA. What has been the biggest culture change for you from your move?

“It’s been almost twelve years since my family and I left France in the pursuit of the American dream, so my childhood is very French, while my adolescence and adulthood is primarily American. There are many things that differ from my homeland, but the biggest difference is the opportunities to become whoever you want to be in this country, and in general, the people will support you in your quest.

I’ve just become American a month ago and I can tell you that America welcomes people from anywhere in the world to become a citizen, it’s amazing. We all want to achieve our dreams, and America is saying, you can do it if you really want to. At least it is the narrative that is so desirable when discussing the American dream. We see now that it is not available for all, that some are privileged while others are kept down… I’m not sure if it is only an American issue, France and other European countries also share these difficulties.”

What is the most important thing you have learned about surviving in the huge Los Angeles music scene?

“Always be true to yourself, listen more than you speak/sing, create a trusted circle of creatives and never ever give up. At the end of the day, if you and what you do is great, you will find your place, I truly believe it.”

I can imagine that there is a band on every street corner in LA. What would you say the Levara and your debut album offers a music fan who is bombarded with new music from all corners in 2021?

“I have respect for all kinds of music, computer driven music and bedroom producers, but what we do is musicians’ driven, like the rock bands we all remember from the golden age of music written, recorded, and performed by musicians. I don’t know if it makes it better music, but it makes it special since it’s becoming harder and harder for bands to make it today.”

Thanks for the interview and good luck for 2021. Over to you for the final words…

“It’s been my pleasure, thank you for featuring Levara, and thank you for reading. I hope you enjoy our music and go get our debut album which comes out May 14th! See you out there on the road.”

Levara released their self-titled debut album through Mascot Records on May 14th, 2021 and you can order it through Masctot’s official website. 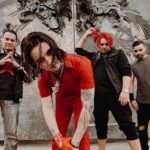 REDDSTAR Unleash Fury with the Video for Their Debut Single, “STFU” [Premiere] 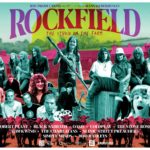