Rising Melbourne metalcore outfit Drown This City describes their new EP, Colours We Won’t Know, as “the ultimate purge of darkness.” For most, being locked down in a city like Melbourne could have been seen as the best option, for DTC vocalist Alex Reade, it forced her to address the demons she’d been suppressing for years.

What that has resulted in is the band delivering their heaviest and most emotional music to date. The follow-up to their 2019 EP, Alpha//Survivor, is a dramatic listen. Veering from striking, haunting soundscapes to face-melting metalcore, Drown This City and, in particular, Reade, have clearly spent their lockdown digging deep into their emotions to produce this six-track effort. Songs like opener “Gemini” and “Beyond The Glare” are gut-wrenching displays, with Reade laying her emotions on the line for the world to see with the band switching up their sound to match her output. Hearing the guttural metal being layered out with some dramatic, haunting electronica, the end result is pure heartfelt ferocity.

Joined by new bassist/vocalist Toby Thomas, the combination of his guttural roars alongside Reade’s emotion-sapping vocals is the cherry on top of this cake. Using the band as a way of releasing herself from the demons that have plagued her for years, Reade and Thomas both throw themselves wholeheartedly into their art. Whether it’s on the piano-soaked opener, the skull-stoving “Carbon 14” or the haunting new single “Borderline Existence,” Colours We Won’t Know is the kind of record that will push, prod and poke into the kind of places you have been keeping hidden for years. All that remains to be said is, lie back, press play and prepare for the kind of emotion releasing experience that not even the best therapist could offer you.

Purely Provocative: The Casual Sexists Get Raunchy and Share Some Scintillating Stories 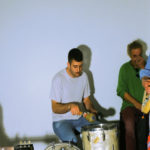 Growing Pains: A conversation with the Stähli Brothers on 30 years of Roy And The Devil’s Motorcycle