Strap on that astronaut suit, because we’re getting ready for liftoff! Our pilot today will be none other than Alexis Pfrimmer and his brand new space rock project 22 for Silicon Alone. Pfrimmer is set to release the project’s new album, Only Dark Matters, on May 21st, an ambitious set of songs that immerse you in some of the most dreamy soundscapes you’ve ever experienced.

A unique artist who is not afraid to travel to places musically that other musicians wouldn’t dare, Pfrimmer has brought together a project inspired by a wide range of artists, including Mike Patton, David Bowie, The Mars Volta, David Byrne, Salvador Dali, and David Lynch. To assist him in moulding this passionate work, Pfrimmer collaborated with several different artists, including producer Floriane Desperier, and many talented violinists, saxophonists, pianists, and visual artists. It’s more than just a music project; it’s an audio-visual experiment that’s intended to give you a cinema-like experience.

Making his intentions for the album clear, Pfrimmer said, “With Only Dark Matters I explore the parallel between dark matter and the unconscious. Both notions are showing us the limits of our perception of the world. On one side we are constrained by our five senses and on the other by our belief system. This affirmation provoked me enough that I wanted to know what it was all about; as if I was having a conversation with a friend about politics where I would want to debunk his arguments until both of us realized that we’ve just made our own truth. I am convinced that everything is created by reflection. So if I dare to lose myself, I might discover that I am ever-changing and limitless. And so is the album.”

Located in Brussels, Pfrimmer chose the name 22 for Silicon Alone for this musical endeavour after he found these four words on NASA’s official website. With the spacey, celestial atmosphere of the music, Pfrimmer felt like these words would perfectly characterize the music he was trying to make. The audiovisual element of the project was heavily influenced by Pfrimmer’s upbringing and education, studying at two audiovisual schools, which immersed him into a world of music, film, and scriptwriting. He has translated that education and experience into a bold new project that is both eclectic and otherworldly in nature. With Only Dark Matters, he has replaced the traditional electric guitar and bass combination with violins and baritone saxophones that leaves lots of room for improvisation and innovation.

This isn’t just an album, it’s more of an immersive experience that can’t help but reel you into a whole new world of sounds and atmospheres. 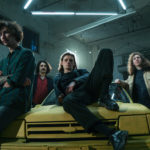 Purely Provocative: The Casual Sexists Get Raunchy and Share Some Scintillating Stories