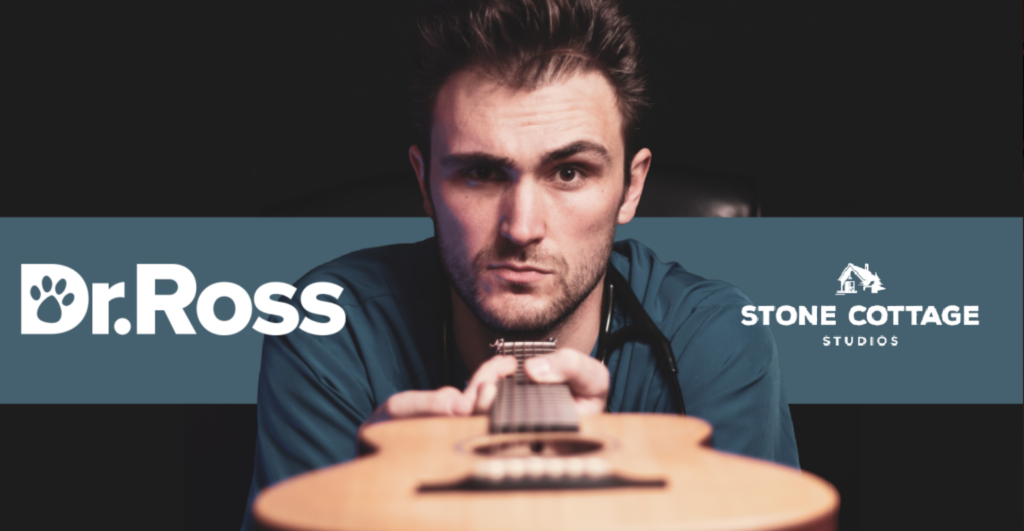 Stone Cottage Studios, a Colorado-based Music Discovery Platform in support and promotion of local and visiting musicians, is hosting a live stream concert with star veterinarian and musician Dr. Ross on April 3. Collaborating with Project Freedom Ride, the show will support their cause of saving dogs and cats from euthanasia. “We have grown very organically over the years which is what we love. We believe people recognize the love, compassion, and hard work of our group and want to get behind our cause,” says a spokesperson for the organization.

Ross Henderson (aka Dr. Ross) will be gracing the stage to bring support and awareness to the organization with his sweet serenades that first gained international attention, including that of celebrities Thomas Rhett and Ashton Kutcher, after a video of him singing to a frightened dog before surgery went viral. This created opportunities that led to him to star in a new Animal Planet series Hanging with the Hendersons. During the live stream concert, Dr. Ross will be performing 10-12 original songs via looping, with multi-instrumentation including acoustic guitar, piano, electric guitar, and both lead and harmony vocals.

His latest release “It’s All In Your Head,” under the name “DocRoss,” explores more of a pop genre and was inspired after someone close to him broke up with their partner and was 100 percent done, while the other person was very much on the other end of the spectrum and wanted to continue as if nothing was wrong… “It’s all in your head, the words have been said, I already told ya, I’ll give you your closure.” Ironically enough the same situation inspired the opposite side of the experience in one of his most gut wrenching songs to date, entitled “Before You Go.” Its lyrics include, “help me believe this is better for us both somehow, I’m begging you please, take it back, you can turn around.”

Overall, Dr. Ross is excited to be sharing several new songs with fans in addition to supporting a cause he cares deeply about. “Supporting and participating in live music, as well as supporting animal rescue, will forever be in my DNA,” says Dr. Ross. “I’m extremely excited for the opportunity with Stone Cottage Studios, to do just that.”