There is no mistaking the sheen and the glitter on Lucas Carpenter’s latest release The Shimmer. The EP is a combination of songs that are a reflection of the long journey his life has taken him on, and the thankfulness he has for all the highs, as well as the lows, that have met him along the way. Referred to as “the art kid from the country,” these songs represent a new beginning for the singer-songwriter. Adopting a storytelling type of approach to songwriting, these are some of his most original creations ever.

Being a good storyteller may not the most novel aspect of being a singer-songwriter, but what really makes Carpenter stand out from the crowd is his unique approach to instrumental looping which is paving the way for a new era of songwriting. A road warrior at heart, Carpenter is an artist who loves to tour, and while he hasn’t been able to do so for the last year, he has invested his time wisely, creatively sharing his story and live show through exciting visual endeavours, all coming from the comfort of his own home.

With The Shimmer now released, Carpenter took some time to join us for a track-by-track rundown of each track on the EP, as he takes us deep into the songwriting process, describing many of the specific situations that spawned this new batch of songs.

“Linda and Paul McCartney’s relationship was always very inspiring to me. They had this wholesome, creative, beautiful relationship that was also the catalyst for songs like ‘Maybe I’m Amazed.’ I’d say that’s something to aspire to! I had recorded this a few years ago, but I wasn’t satisfied with it. Working with my producer Kevin Rooney on this EP really took these songs, especially this one, to another level. Obviously the lyrics are all references to Paul and Linda’s relationship, but there’s other nods to them as well in the sounds we used, including the very ‘70s/‘80s synth sound in the instrumental section.”

“I wrote the chorus of this song many years ago and always loved it, but it wasn’t until working on this new batch of songs that I finally finished it. Like most artists I’m my biggest critic, but this song was a sassy way for me to confidently own who I am, while pushing the haters aside… It’s kind of like my ‘I’m Every Woman,’ or something (laughs)! I write pretty much all my songs on an acoustic guitar, so it’s always awesome building the tracks up into these fully produced pop jams. This song has a bunch of fun layers including high-strung guitar, Irish bouzouki (octave mandolin), plus I’m a big fan of the lead synth line in the chorus.”

“This song took a while to come out of me, as it’s a very personal, meaningful song for me. Sometimes we can wall ourselves off from people due to the trauma we’ve experienced in life, and this song is about having the patience to work through that. I wrote it on acoustic guitar, but it’s now played on hammered dulcimer, which has always been one of my favourite instruments. A personal hobby of mine is hunting, and the recording actually features a hoof rattle I made from a white-tailed deer I harvested. I always use as much of the animal as I can, so creating projects from them like the hoof rattle is deeply spiritual.

Musically I’m a huge fan of digital/electronic sounds against the acoustic/organic, so this song is a great example of that. I don’t know of too many songs featuring hammered dulcimer, a homemade deer hoof rattle, and vocoder robot background vocals!”

“After having a very enjoyable afternoon with a new love interest I woke up that night at 2 am with the song concept in my head and couldn’t go back to sleep. I remember hearing John Mayer once talk about how if you’re inspired you MUST drop whatever you’re doing and write, because if you don’t you’ll lose it. I kept thinking that while I laid in bed, until I finally said ‘fine John Mayer, I’ll get up!’ By 10 am the song was finished. I ended up playing the song that night at a writers round in Nashville. It was the most ‘Nashville’ 24 hours of my life (laughs)! Thank goodness I didn’t go back to sleep.”

“We all have those moments where we see someone and we know it’s most likely going to end terribly, but we ignore the red flags and say, ‘screw it, I’m going for it anyways!’ Better to have loved and lost, than never to have loved at all, right? I play a penny whistle for the main hook on the track, which is an instrument that’s been a big (or tiny) part of my music since the very beginning. This particular penny whistle was actually gifted to me by a fan years ago and it was made by her father.”

“I wrote this years ago as I was watching many of my arts/entertainment friends slowly give up on pursuing their dreams. It was meant to be a love letter to them. This can be a very lonely, discouraging pursuit a lot of the time, but if you can keep remembering why you started in the first place, then you just might be able to keep going. It’s kind of become an anthem for me over the years and it made sense to include this on the EP, given this is the birth of a new era in my musical journey.” 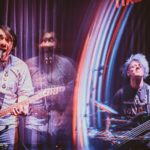