There’s no mistaking it, we live in the age of insecurity. It’s a beast that can take on so many forms. While some insecurities are justified, by far the worst and perhaps the most rampant form is Heavy Male Insecurity. 2020 succeeded in one regard; pinpointing how shamefully insecure so many men are, particularly those in positions of power. Norway’s Death by Unga Bunga has observed this growing tendency, and they have chosen to draw further attention to it with their timely titled new record Heavy Male Insecurity. Arriving on February 12th via Jansen Records, the album is set to drop like a hurricane of glam rock riffs, breezy vocals, and a big batch of good vibes. The band likes to think of it as music for the soul, something to steer your mind away from these troubled times in which we live.

One of the key cuts on Heavy Male Insecurity is the album closer “White Lies.” As you may have suspected, it’s a song about lying, but maybe not quite the type of lying you may think. As the band has stated themselves, “Being a traveling band, you often find yourself telling a polite lie or two about how much we enjoyed your shitty venue, and how we’d love to come back asap. It’s about that and that one time someone tried to stab us in Bristol, England.”

It’s been an eventful last 365 days for Death by Unga Bunga. In that time, the band started a streaming live show titled Once Upon a Time in Deadwood City as well as created its own beer Death By Unga Bunga Cream, a refreshing cream ale. On the musical side of things, they managed to release four brand new singles, including the ‘70s-inspired hard rock riff-fest “Not Like The Others.” Through their over 13 years together now, the band has been an inspirational force, willing to evolve and diversify the powerhouse sound they introduced to listeners with their 2010 debut Juvenile Jungle.

Along with the debut of “White Lies,” we recently chatted with the band for the latest in our UnCovered series. We chatted with lead singer and guitarist Sebastian Ulstad Olsen about the creative process behind the cover artwork for Heavy Male Insecurity and working with their longtime friend and artist Human Nature.

Sebastian Ulstad Olsen: “The main inspiration was our overall theme of the new album Heavy Male Insecurity. In this case, quite literally.”

The album cover is pretty awesome and unique. Tell us about the artist and how you found her?

“The artist, Human Nature, is a childhood friend of ours and tattoo artist extraordinaire from our hometown of Moss, Norway. We’ve been doing shenanigans with him for many years, so it was a natural fit as he knows our humour well.”

What were the partnership’s dynamics like? For example, was a specific look given, or did Human Nature have full free range?

“We bounced a couple of ideas between us preliminary, but he quickly figured out how to reach our hearts so we let him have pretty much free range from the get-go.”

Would you consider Human Nature an additional band member or someone contracted for just this piece?

“He’s not quite a full-fledged member, but we’re not going to let him leave our lives either. Fun fact: He actually tattooed my mom!”

Did Human Nature hear the album beforehand? Or, what kind of input did you give him?

“We definitely filled him in on the overall theme of the album and showed him some demos and mixes as we made them. We began with the artwork on the singles before we knitted all the parts together in the final album artwork.”

“Yes I have, but I will never do it again. The music will never live up to the expectations for me.”

“It still sticks out of the crowd in my opinion. We also have a lot of fans that buy our music physically, so it has always been important for us.”

When people look at the album cover artwork for Heavy Male Insecurity, what do you want them to see/think?

“We want them to see a macho man carrying the world on his shoulders even if nobody asked him to. He doesn’t know this as he instinctively believes that it is his burden.”

“This is perhaps not music-related, but I’m a huge fan of trashy 3D art. Check out Andreas Emil Lund. He was the guy who made our animated music video for ‘Not Like the Others.’”

“Digital art has the advantage of being able to reach a bigger crowd if you know the ins and outs of building an online following, although it’s harder to make money. I like to see paintings and photography with my own eyes, but I haven’t really thought too much about this.”

“Oh man, I really loved my Velvet Underground banana shirt when I was a kid, but I grew out of it years ago.”

How do you think the album art for Heavy Male Insecurity will affect the listener’s perception of your album?

“Hopefully it will give the listener some more depth to the songs. If we had a more cheeky artwork, people could think that we’re trolling about insecurity.”

“No, this one stands firmly on its own legs. It’s probably the closest we will get to a concept album.”

When it came time to come up with artwork, did you give Human Nature guidance or was this just a natural brainstorm?

“It was a brainstorm for sure. We knew which themes we wanted to explore, but the execution was totally up to Human Nature. It felt more natural for us to give guidance once we came closer to the finished product.”

“Definitely the ‘ALL PAIN NO GAIN’ tattoo.”

Did Human Nature work on any art for the album besides the cover?

“Yes, he did all the cover artwork for the singles leading up to Heavy Male Insecurity.”

Finally, do you have a favourite album cover of all-time?

“Iggy and the Stooges’ Raw Power is my favourite album cover. I feel like it’s a time capsule of the early ‘70s, visually and musically.” 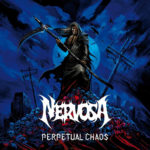