Indie pop artist and multi-instrumentalist, Gerald Slevin dropped his timely debut single “Kiss to the Future” on February 12. After fronting Brooklyn NY’s acclaimed psychedelic art-pop outfit The Color Bars, Slevin is gearing up to release his debut solo album, Quantum Jitters, in 2021. He sings and records every instrument himself, layering copious amounts of synths, drums, guitars, and lush vocal harmonies in his private Upstate NY studio. His sound is a textured blend of Beatles-esque melodies and vocals that incorporates a modern sonic palette, much in the same vein as contemporary pop-rock luminaries Tame Impala, HAIM, and Vampire Weekend.

The idea for “Kiss to the Future” came almost by accident. On a recent hike with his 4-year-old daughter, Slevin found himself trying to gently explain the temporary nature of the pandemic, in response to her asking why they had to wear masks. Suddenly, she blew a kiss to the sky. “I asked her what that was about, and she said she was blowing a kiss to the future,” he says. He was so moved by the gesture, he wrote the entire song in about 15 minutes that very day. The result was a message of unity and humanity in a time of profound darkness. “After so many years with The Color Bars, I wanted my first release as a solo artist to be something optimistic and forward-looking, so it was kind of perfect.”

An accomplished visual artist, Slevin does all of his own cover art, and his imagery reflects the dream-like and layered aural experiences of his music. Born out of a compulsion to create sounds as colourful and varied as his visual art, Slevin continues the work he started with The Color Bars by seeking out the interplay between the challenging and the accessible.

“Kiss to the Future” is an incredibly promising debut for an artist that has already cut his teeth on other projects and is ready to find his solo stride in 2021. “I think the song is about trying to be actively optimistic,” says Slevin. “It’s not always easy, especially these days, but I think it’s something you can work at.”

Before launching his solo career, Gerald Slevin made a name for himself as the songwriter, multi-instrumentalist, vocalist, and producer of Brooklyn’s psychedelic, vocal harmony-driven artpop outfit, The Color Bars. The band’s layered vocal arrangements and acrobatic instrument-swapping performances quickly gained the attention of the NYC music press, and they were soon sharing bills with artists like The National and Metric at famed NYC venues like the Mercury Lounge and Knitting Factory. Their bombastic stage show, along with their kaleidoscopic records (on which Slevin was the primary producer, instrumentalist, and vocalist), would eventually take Slevin around the world, after a particularly explosive SXSW set with The Brian Jonestown Massacre resulted in a deal with Tokyo-based label, 5D. Performing in Japan sparked a flurry of creative output for Slevin, which led to 4 albums, several tours, and a string of singles.

Slevin recently retreated from his native NYC to Upstate NY to immerse himself more fully in his current solo project. His forthcoming album, a concept album entitled Quantum Jitters that grapples with the contradictions of love and relationships via the metaphor of quantum entanglement, is his most expansive and fully-realized work yet. A classically-trained painter and visual artist who has exhibited and painted for Art World juggernaut Jeff Koons in his Manhattan workshop, Slevin says this background continues to inform his process. “I’m very lucky to have had all the experiences I’ve had in both visual art and music. It’s given me an extremely useful perspective on how so many of the same rules apply across superficially different media. Finish what you start. Work the whole thing. Never give up. That sort of thing. It’s also taught me to be eternally grateful that I get to make stuff.” 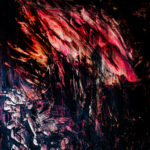