Unconventional is how you may think of musician Andrew Delaney. There are few artists capable of alternating seamlessly between droll and more serious moments, but the singer-songwriter has practically mastered this art on his brand new album The Villain Is Right!. Due out on February 19th, Delaney has no problem indulging in the awkward, nerdy moments of his past, and there is no hesitance from him when it’s time to make light of the serious side of life.

There’s an absurdist tone to the album that’s mended throughout its eleven tracks, which makes for an interesting listen full of unexpected moments. For example’s sake, album closer “Nonsense” is a direct account of Delaney’s battle with the worst of depression. Based on its subject matter, you would assume this is a weighty song for him, but it has a comedic tone to it, with Delaney sounding like he’s having a grand old time over a lighthearted mix of indie and folk-rock.

Explaining the context of The Villain Is Right! and its broader significance, Delaney told us, “I feel like the album is about me coaching myself (and hopefully like-minded others) through tough subjects by breaking them down into smaller elements or examining them through the lens of the things that I love (monsters and horror movies and weird history and wordplay and absurdity). It’s meant to be humorous but not entirely comedic. I’m not a very serious person, but I wear black all the time and walk around with a mostly blank expression and suffer from bouts of depression. I think this album is about me saying to people, ‘See! I’m fun!’ despite all the outward evidence to the contrary.

I love drama in my art. That phrase ‘the villain is right!’ struck me as super melodramatic. I want to say it with wide eyes and flailing limbs. Also, I identify a lot with villain characters. Like Batman’s villains are always more interesting than Batman. So I like stories where the villain is well-defined and has human motivations and is justified in some way in what they’re doing. So their ideas are sound and their intentions are good, but their methods make them the bad guy. Mustache-twirling, evil-for-evil’s sake villains are boring.”

Co-produced by Delaney along with Justin Farren, The Villain Is Right! finds Delaney more openly embracing electric guitars and an alternative sound, as compared to his more twangy, folksy roots that are more apparent on his earlier albums, 2018’s Whatever Still Remains, 2017’s The Escape Artist, and 2015’s Stricken, Smitten, and Afflicted. The Villain Is Right! was mostly recorded last summer when the COVID-19 pandemic offered Delaney a lot of free time to write and record. Although they weren’t able to collaborate in person, the record does feature some special guest stars, including Emerald Rae, Josh Blue, and Tracy Walton, who all contributed their parts remotely from their homes.

Heavily inspired by the songwriting and performance styles of Tom Waits and James McMurtry, Delaney comes across as both dynamic, unpredictable, and intelligent. With his wit, candour, and charming eccentricities, there are few artists as fascinating and engaging as Andrew Delaney.

The Villain Is Right! Track Listing: 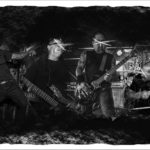 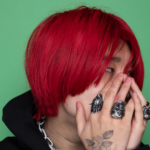