The “Tides” are turning in your favour today with a double shot from The Pneumatic Transit. The instrumental progressive, jazz-rock band, who we have previously featured, is debuting their new music video for “Tides,” and were kind enough to hook up a free song download of one of their other latest tracks, “Shipyard Dawn.”

Both singles come from their latest EP Nimoy, a short concept album that the group plans to release on February 4th. The EP comes as a new milestone for the group, something a little bit different from what you’ve heard from them before. The songs are more diverse and dig musically deeper than Nimoy’s predecessor, the full-length Chordae Tendineae, which is saying a lot considering the fact that that album was as unconventional as you could find. It’s what you would expect at this point from band mastermind Jeff Zampillo, a man unafraid of taking musical risks in his songwriting.

Discussing the background behind the EP as well as “Tides,” Zampillo offered, “Nimoy was derived from a short story I wrote for a creative writing course in college. Protagonist, Leonard, finds himself in conflict with stability (represented by Lily) and passion (evoked by a leitmotif sprinkled throughout the EP). In nonlinear fashion, Leonard confronts Lily and then abandons her. ‘Tides’ conjures that whimsical feeling of the inception of an idea. The specific idea being, to trust one’s self and take a leap of faith. Consequently, the waves crashing into the shores of Leonard’s self eventually diminish to a gently rolling tide becoming nothing but a faint memory.

The video for ‘Tides’ was filmed and edited by Mariana Meraz in New York City. Visual ambience was the primary objective behind the concept for the video.”

Zampillo is a former member of the band Exotic Animal Petting Zoo. Upon leaving the group in 2013, he chose to pursue his own musical endeavours which led him to begin experimenting with Mike Mirro, a former member of American rockers Umphrey McGee. Unfortunately, McGee passed away in early 2020, around the time of the release of The Pneumatic Transit’s Concerto for Double Moon album. The death of McGee really shook Zampillo, but he decided to continue to pursue The Pneumatic Transit, first as a solo project and now as a band. It’s been full steam ahead ever since and the band continues to improve, defying all musical expectations. 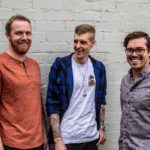