We hear the term “Millennial” tossed around a lot in these current and unconventional times. It’s become one of those buzzwords that’s thrown out there for many different purposes, but what’s consistent about its use is that it’s always used to refer to young people or the youth of the nation. Unfortunately, the media has oftentimes conjured up negative connotations when it comes to the word millennial, connecting the term with thoughts of a generation who are unmotivated, aloof, or even irresponsible.

Fortunately, we have artists such as Benjamin Winter who are ready to stand up for us and set the record straight. Winter has just released his brand new music video for his latest single “Millennial” which comes from his latest album WolfHunt. A reinvention of himself as an artist, we brought you the premiere of the album this past February. Now at the very end of the year, Winter is still maintaining a lot of creative mileage off the record, with the artful and inspiring new video for “Millennial.”

Expanding on the song and the shooting of the music video, Winter told us, “To the generation that has been condemned, ‘Millennial’ is an anthem of encouragement with their predecessor’s fiery support. A lifting up with the passing of the torch. We hope and need for them to refine their passions into pure gold.

We searched for a location everywhere from Amsterdam to Oakland and the ‘old church’ look that we were searching for ended up being in our own town of Alameda, California. So it was fun because getting the 75 extras needed was easy, as a lot were friends. I also got to work with director Frank Door who is an old high school buddy and also directed our Lighter Side video ten years ago.

The narrative is meant to be a numbness, almost a trance of the magically growing audience mindlessly chanting along. The band represents the past generations trying to get through to them to stand up straight and strong. To tell them ‘you got this.’ Like everything associated with WolfHunt, the video is in black and white because it’s the truest form of visual expression. I want WolfHunt to be simple and strong and black and white allows for content to speak clearer without the distraction and mood associations of colour.”

“Millennial” is a groundbreaking song for Winter and without it, we may never have seen the release of WolfHunt. When he began experimenting for a new record, Winter found an old vocal note saved on his phone that wasn’t quite like the sounds he was beginning to toy with. That vocal note eventually turned into “Millennial” which he shared with friend and bandmate Jeroen Ligter in Amsterdam. Ligter was highly impressed by what he heard which jumpstarted a two-year process of songwriting and recording, resulting in WolfHunt.

The record marks a significant musical departure for Winter, away from his folk roots towards a more guitar, stadium-ready sound. This departure has proven to be a winning formula for Winter and it has inspired him to feel comfortable pursuing sounds and styles that he may have previously been hesitant to follow. 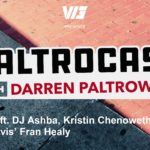