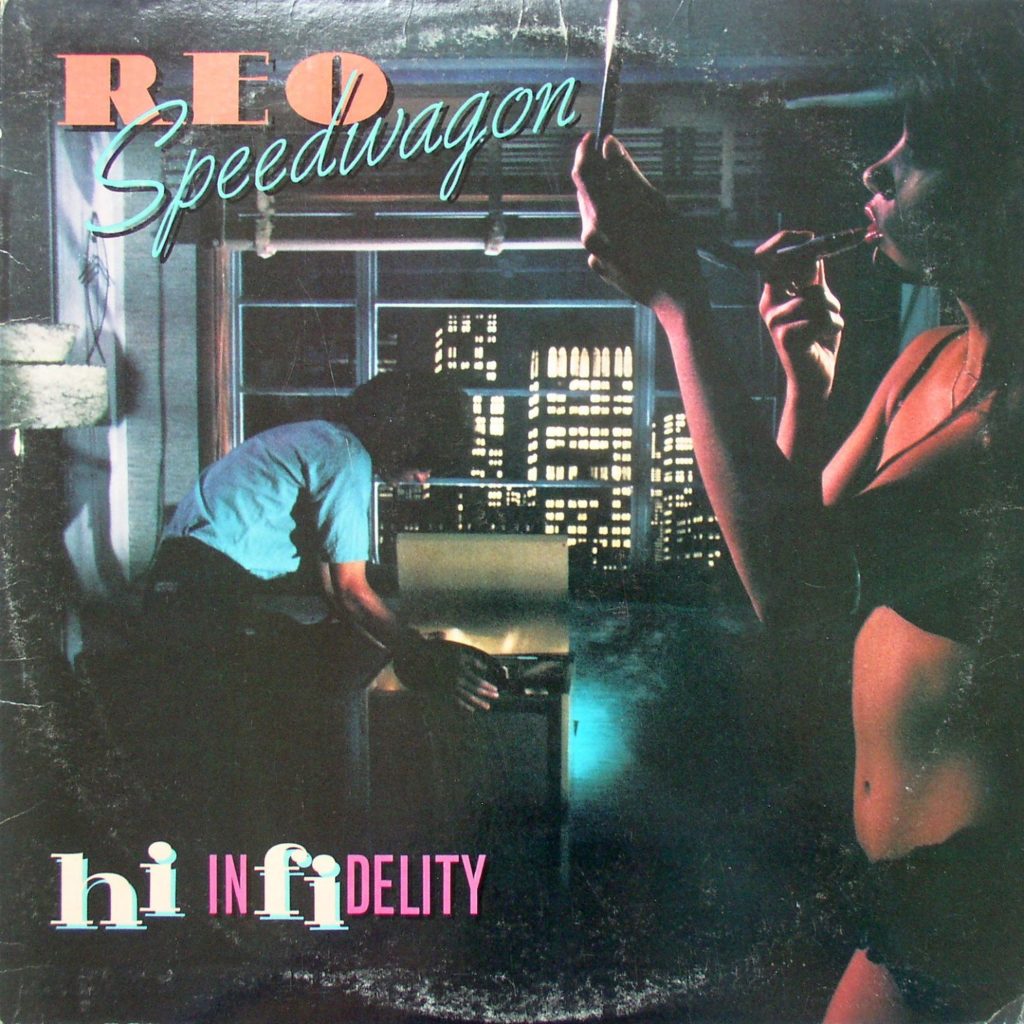 They’d managed their way out of the muck and mire — slogging through the trenches for nearly a decade. And in 1977, the Illinois-based rock stalwarts finally got a taste of well-deserved commercial success with their platinum, double-live LP, You Get What You Play For. Featuring the soon-to-be AOR staples, “Roll with the Changes” and “Time for Me to Fly,” their 1978 follow-up, You Can Tune a Piano, but You Can’t Tuna Fish, soon became the band’s first million-selling studio slab. Projecting a decidedly leaner, meaner sound, their next album, Nine Lives was certified gold in 1979. Yet, despite fan perception of the group’s “superstar” status, by the fall of 1980, the suits at Epic Records reportedly were insisting on a massive breakthrough. And 40 years ago this week (November 21, 1980), REO Speedwagon delivered in spades.

What REO needed desperately was a bona fide radio hit. And Hi Infidelity birthed a bounty of ‘em. Penned by frontman, Kevin Cronin, the saccharine-soaked lead-off single, “Keep on Loving You,” quickly became a #1 smash and helped propel the album to the top of the Billboard chart in short order.

The record’s common themes — romantic relationships and the ultimate heartbreak, resonated with the band’s newfound teenage audience. And by the spring of ‘81, Hi Infidelity had been anointed as the official soundtrack to every high school house party and backyard kegger in America. It would go on to become the best-selling album of the year.

A collaborative production effort between Kevin Beamish (The Miracles, Jefferson Starship), Cronin, lead guitarist Gary Richrath and drummer Alan Gratzer, the album hit hard, straight out the gate with the heart-stopping, “Don’t Let Him Go.” The effervescent keyboard work of Neal Doughty, pinned to Richrath’s arena-caliber riffage and Gratzer’s meat and potatoes drumming made this an urgent opening track and a crunchy competitor on Casey’s countdown.

Bathed in wah-wah splendor, Richrath’s “Follow My Heart” was a sexy-sounding standout. Additionally, Richrath’s “Dear John”-inspired, “In Your Letter” boasted a Buick-sized hook and sparkled like a diamond, thanks in part to Doughty’s “black tie” piano solo. Another celebrated break-up anthem, “Take It on the Run” was the record’s second Top Ten single, with Richrath’s iconic solo slicing through Cronin’s crisp acoustic rhythms like that proverbial, hot knife.

The creative tension throughout Hi Infidelity was palpable — the stylistic tug of war between guitar god Richrath and pop purveyor Cronin. And the result was magical. Cronin’s “Tough Guys” and “Out of Season” were insatiable siblings whose backsides were blistered by Richrath’s “belt,” while “Shakin’ it Loose” was a no-holds-barred rocker that would have been a comfy fit on Nine Lives.

Making his third studio album appearance, bassist Bruce Hall no longer was the “new kid” in the REO camp. And he made his presence known — bringing his signature-style swagger to the table, providing lead vocals on his high-octane keeper, “Someone Tonight.”

Oddly, despite the slew of polished, pop-fueled hooks and raw, rock-ribbed riffs, Hi Infidelity arguably shines brightest on the gospel-drenched closing track, “I Wish You Were There.” A likely reflection of their Midwest roots, REO nail this one with all the authenticity of an old-time, big-tent revival. Doughty’s Sunday morning piano playing is blameless, Cronin’s vocals are truly praise-worthy and Richrath delivers one of the most inspired solos of his career. And the church choir back-ups — heavenly, indeed.

The band Neal Doughty founded in the ‘60s would power successfully through the ‘80s — racking up an impressive string of platinum albums and chart-busting singles. They remain a wildly popular concert attraction today. Yet, Hi Infidelity always will stand tallest among the many entries in the iconic REO Speedwagon catalogue.