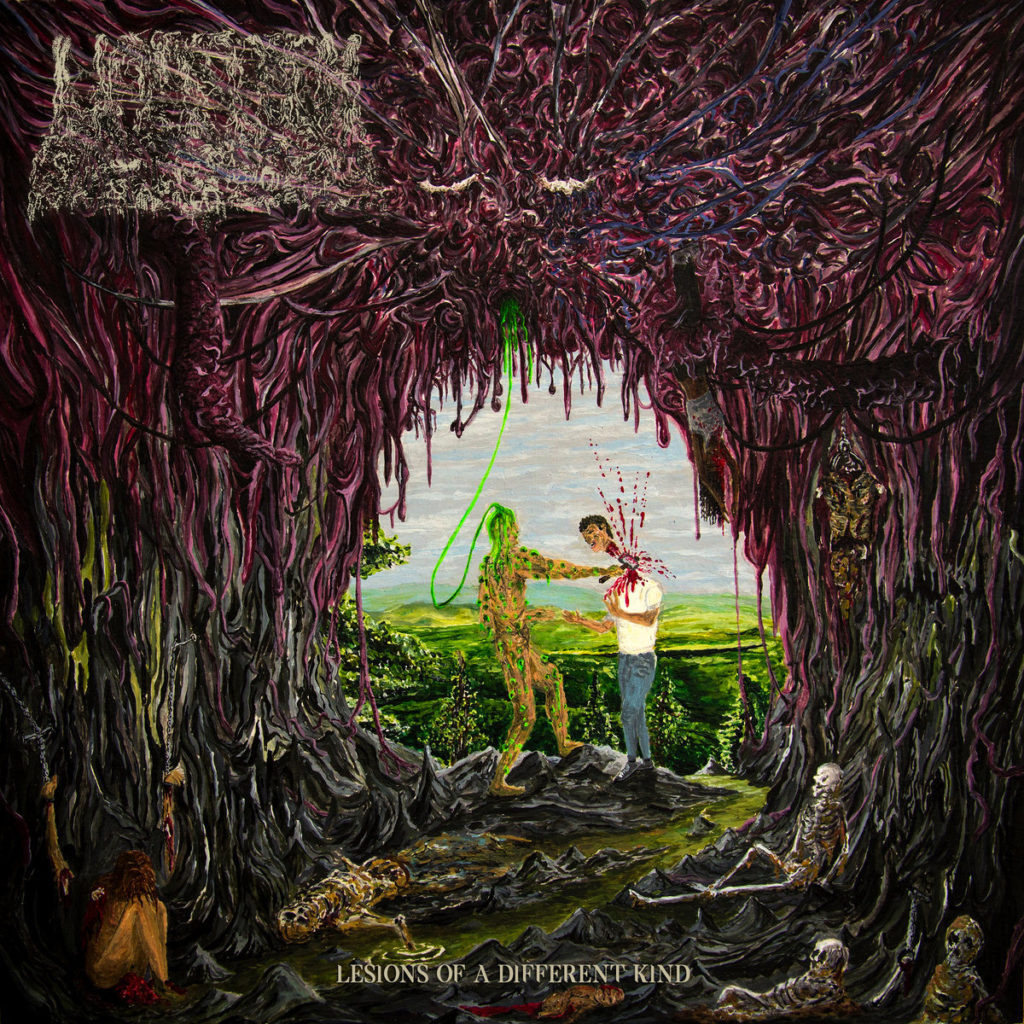 New York newcomers, Undeath might be one of the flagbearers for the new breed of death metal bands but a quick listen to their Prosthetic Records debut, Lesions of a Different Kind, will have you finding an album that has both feet rooted firmly in the death metal scene of yesteryear.

Tipping a nod to the old-school filth of groups like Carcass, Autopsy and Cannibal Corpse, this ten-track slice of grot is wonderfully horrible. So horrible, in fact, that it should come with a warning. Be prepared that, as you plunge headfirst into this album, by the end you’ll be feeling so dirty and grubby you’ll need a bleach shower to scrub it out of your skin. Zero warning given, the New Yorkers spew straight into opener “Suitably Hacked to Gore” and, from that point, with their disease-ridden claws fully embedded in your skin, this savage assault does not let up.

Utterly grim, the New Yorkers are joined on the title-track by Trevor Strnad from fellow grime-peddlers The Black Dahlia Murder, although his dulcet howls are just the cherry on top of this very rotten cake. Elsewhere, “Lord of the Grave” is a sludgy slice of savagery only matched by the foul “Kicked in the Protruding Guts.” Then, just as you think this stinking pile of filth couldn’t become any more disgusting, up out of this rotting corpse pops the maggot-riddled “Chained to a Reeking Rotted Body.”

Unsurprisingly, Lesions of a Different Kind doesn’t reinvent the wheel nor try to be anything spectacular. What Undeath do, though, is deliver ten tracks which epitomize everything that old-school death metal fans love about the genre. Lesions of a Different Kind is a nasty display with all the traits of an album that, in time, will surely see it being talked about alongside the greats of the genre that are clearly responsible for its existence.

1. Suitably Hacked to Gore
2. Shackles of Sanity
3. Lesions of a Different Kind
4. Entranced by the Pendulum
5. Acidic Twilight Visions
6. Lord of the Grave
7. Kicked in the Protruding Guts
8. Phantasmal Festering
9. Chained to a Reeking Rotted Body
10. Archfiend Coercion Methods